Our most recent addition to the CEO Speaker Series was CEO and co-founder of Nicole Miller, Bud Konheim. Along with Mr. Konheim came Andrea Marron, Director of E-commerce and Retail. They chatted with the MBA and MPS students of LIM College. Director of Graduate Studies, Jacqueline Jenkins, introduced the keynote speakers. 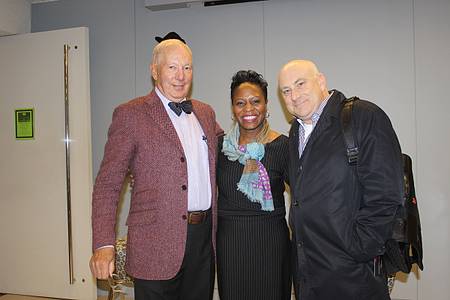 Mr. Konheim started by mentioning four real life stories he wanted to tell the MBA and MPS students. Each story had a point behind it. He begins his first story about how me met Nicole Miller and how teaming up with her introduced innovation for the Nicole Miller company. “Were standing on an acre of diamonds, and were not dumb to bend down and pick them up”, Bud Konheim mentions. 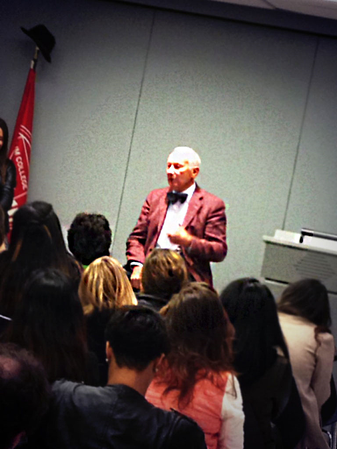 Bud Konheim’s entire career was built around recognizing and seizing the opportunities he was presented with.  He began his second story about how the Nicole Miller Company entered the tie business. One day, Nicole Miller was drawing a print which featured a bundle of theater tickets and one of the tickets had the letters MET across it, representing a ticket from the Metropolitan Opera House. They had ordered a bunch of dresses with this print and you if you can imagine, they were loud and disastrous. It was Bud’s genius idea, an opportunity that no one expected would be so profitable, to request a tie to be made out this loud print to accompany his quirky sense of style. A few days later they had 36 ties with this one of kind print. At that point in the world, everyone was wearing navy and red stripe ties with white shirts and navy suits, very MAD MENish. No one deviated from that color scheme. Recently opening up Nicole Miller Madison Avenue location, which still stands, they sent the ties not knowing what to do with them but sell them off as belts or a dog leashes. A gentleman shopping in the store asked to borrow one of the ties. Oh so conveniently, the gentleman happened to be the guard at the Metropolitan Opera House who took the tie back to the buyer of the gift shop. The tie was a big hit. The buyer went back to Nicole Miller and purchasded the remaining ties and placed a order for 300 more.

“Innovation is around you all the time, there’s not a piece of anything that is lost if you suck it all in and use it.” - Bud Konheim

Nicole knew she had fun drawing prints of subway tokens, Chiclet boxes pretty much anything from the bottom of her purse. This led to million dollar tie deals that were selling Nicole Miller ties at Barneys New York, Saks Fifth Avenue, and Bloomingdales without making one sales call. Popularity grew because of the boldness of prints and this directed Nicole Miller focus to create a new print featuring baseball, football and basketball sports. A phone call from Larry Bird, who persistently requested a tie featuring his jersey, led to the creation of the story about the “thousand dollar tie” by Nicole Miller that landed the pages of Sports Illustrated.

Bud’s third story was about how Nicole Miller sub-labeled her designs with JC Penny. After discussing with Nicole, Bud’s point was that if the company wanted to sell America, it would take a risk to start distributing in JC Penny. Currently their clients were Neiman Marcus, Nordstrom, Saks Fifth Avenue and more, but that’s was only a small fraction of America for the prices of their fashions. Bud feared for the Nicole Miller Company because the last time a designer had sub-labelled with a huge retailer was Halston and that didn’t turn out good at all.  “It’s risky. Do we want to take that kind of a risk?” Bud questioned. In May 2005 the line was launched and publically announced during the Academy Awards of that year. Patiently waiting, in his suit of armor, that one of Nicole Miller biggest clients would drop the company, Neiman Marcus, Bud Konheim's deal with JC Penny released Nicole by Nicole Miller and it was a success. That was the start of the designer collaborations, where every designer wanted to be involved in.

“There’s’ opportunity every single day. Recognize it when it comes along.”- Bud Konheim

Bud Konheim’s fourth story brings him to current day and how Andrea Marron has taken Nicole Miller to being an E-commerce leading company. A fe years back, he received a call from Dartmouth Business School about a student who is interested in interning at a fashion company and he gladly agreed. Andrea Marron, received an internship at Nicole miller and impressed Bud very much. She was so educated about the technology revolution that was taking over the fashion industry. Immediately, he recognized her talent and offered her a job at Nicole Miller. Andrea replied by saying she was offered a job at Google. “Why would you want to be a little fish in a big pond? Here you’ll be a big star!”, as he pleaded her to join the company. 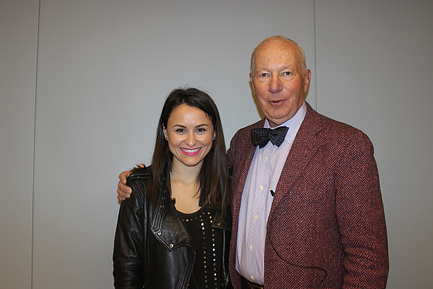 After 59 years at Nicole Miller, Bud had never thought of capitalizing on the runway. Andrea took the initiative to house their own e-commerce sector within Nicole Miller rather than outsourcing it to a third party. This strategically gave Nicole Miller a competitive advantage where they fulfill orders, create web development programs and media campaigns faster and quicker than ever before.  Allowing the company to be more tech focused and savvy.

“The new era is not about the editors and the magazines, but about social media, the internet and the customers.” - Bud Konheim

“I never had a dull day” at Nicole Miller  – Bud Konheim