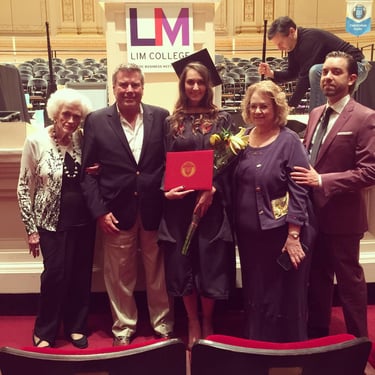 I wanted to be in fashion since I was a little girl. I’d travel to New York City each year with my family. We’d shop, eat, and watch a Broadway show. I remember being in Saks Fifth Avenue watching the runway shows on the big screens. By the time I reached middle school, I had my college life all planned out. I’d go to fashion school in New York and carry on my dream. Well … things unfolded a little differently.

I did not attend fashion school, but rather West Virginia University, where I majored in Fashion Merchandising. During my time at WVU, I did some interesting things like going on a fashion tour in NYC, where I met designers and saw showrooms behind-the-scenes. I also studied abroad in Italy for a summer. Post-graduation, I worked at Gap and Macy’s, and I ultimately landed a great job at Gabe’s as a Merchandise Assistant. But, I still wasn’t close to my dream of attending fashion school in NYC.

I also yearned for a master’s degree, so I began looking into master’s program options. With a background in merchandising rather than design, I wanted a school that would give me the best opportunity to excel. I stumbled across LIM College and decided to visit when I was next in New York. The moment I experienced LIM, I knew the school was the right fit for me.

I applied, landed an interview, and was accepted! I first planned to attend the school in person, but later decided to earn my degree online, so I could continue gaining industry experience at Gabe’s.

I expected being an online MPS student to be a lot easier than taking classes in the flesh, but I couldn’t have been more wrong. The program pushed me to my limits, especially since I was working full-time while completing it. Luckily, my professors were always there to help. My MPS coursework forced me to become more organized and learn how to prioritize. I learned about fashion, but also everyday life skills. The experience took many of the things I learned as an undergrad and went more in-depth on each subject.

Even though I was in West Virginia, I still made it a point to reach out to LIM and get involved. I became a blogger for the College. I also worked a day from the Gabe’s New York City office so I could volunteer for New York Fashion Week, which was an unbelievable experience!

One of the most important lessons I learned as on online MPS student was to never be afraid of asking questions. Being a remote student, I found it was important to put myself out there as often as possible. This approach really helped me along my path to earning my MPS degree, which I know will aid my growth in the fashion industry and help my future success.