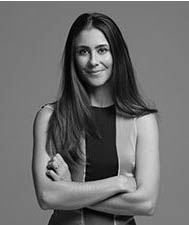 All women love shoes, right? But how many times do frustrated shoppers say, "Ugh! They don't have my size" or "They don't have the color that I want"?

Imagine being able to shop for the shoes you want in the height, style and color of your choice...at the click of a button and all in the comfort of your home! Well, Jodie Fox, Michael Fox and Mike Knapp put the idea into reality.

Straight from down under, Jodie Fox, a former law student and co-founder of Shoes of Prey, graced the halls of LIM College to talk about the triumphs (and struggles) of starting up a business. She began by telling us about the company's first office—her one bedroom apartment in Australia.

But things moved from that point quickly. The business launched in October 2009, and after two months, they broke even. In two years, their business reached a multi-million dollar level.

The website for Shoes of Prey is designed in a way that is easy for customers to play and experiment with the design of their shoes. Just hit "start designing" and an array of choices come up. "We don't mean to make designers redundant," Jodie explains. "It enhances them.”

Jodie feels that demand manufacturing is the future of retail. The truth of the matter is manufacturing is expensive. Minimum order quantity has become a hindrance to people starting their businesses, and, customizing is exciting, says Jodie. It makes customers more pleased with their shopping experience because they get exactly what they want.

However, the road to success hasn’t been easy for Shoes of Prey. Their unique business model encountered criticism and obstacles (like anything worth doing). But Jodie was passionate and determined. "You have to believe in it because if you don't, no one else will," she says.

Starting a business is tough. “Advertising is expensive and you have a lot of noise to cut through.” In 2009, when they began Shoes of Prey, they sought to get traction. They approached a 16-year-old YouTube sensation who had a huge following on social media. It was a good thing they thought ahead and backed up their servers because from the half a million views the video received on YouTube, their website was getting a great deal of traffic. However, their sales chart was flat.

Using the YouTube platform was a genius idea. However, their audience was teenage girls who couldn’t afford the price points of their shoes. Jodie quickly learned a valuable lesson. Traffic does not necessarily equal sales.

They picked themselves up from this stumble and made a case study about their mistake and were interviewed by the Wall Street Journal whose readers were more their target audience. Jodie stresses how important it is to know and understand your audience. This way, you will be able to find the funnel on how to get to them, she says.

Looking back, Jodie says that they were fortunate that things fell into place, but they also made their own luck. They were proactive and did not let any kind of defeat bring them down.

She explained that their idea was their "purple cow." A concept that she advised LIM graduate students to go out and find. "If you were driving down a road and drive past a field of cows, nobody would really stop to look. However, if they saw a purple cow, they would stop and pay attention."

According to Jodie, "When you start a business you're not an expert at anything.” “You need to draw in expertise from other people, but you should be able to discern if it's right for your business."

Jodie says her favorite part about her business is creating a unique shopping experience for her customer. She draws joy from the moment the customers open the box and hold their brand new pair of shoes—something that they created themselves, for the first time. “We have pictures of our customers unboxing their product,” she says with apparent glee.

Shoes of Prey continues to be successful. They never thought the brand would have actual stores, but, they have stores all over the US and recently opened a branch in Paramus, New Jersey. Having a brick and mortar store allows customers to see the fabrics, colors and textures. They can also see how the shoes fits.

Her last piece of advice for LIM students who want to start a business? “Make one decision and see what happens. Do everything before you're ready because you are never going to be ready for anything. Believe passionately about what you're doing. Your passion is your secret weapon. Most importantly, you become a leader right away when you start a business. You need the emotional support of your family and friends.”