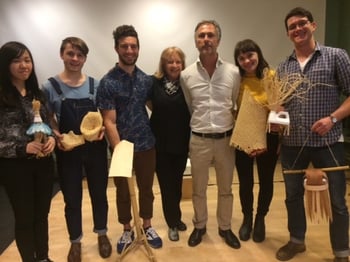 Free! Every student’s favorite word. Between all the jobs, internships, and classes that we’re juggling at LIM, sometimes we need a break from everything. And what better way to do just that than at a free event?

The Cooper Hewitt ­Museum launched the Design by Hand series in the fall of 2013. The series was launched in partnership with Van Cleef & Arpels and Marimekko and it focuses on craftsmanship and innovations of contemporary designers.

Design by Hand is hosted bi-annually and is scheduled to run until the spring of 2017. The series includes workshops and public lectures with various influential designers.

I attended the most recent workshop on May 17th which was held in collaboration with Estudio Campana. The company was founded by Humberto and Fernando Campana, two Brazilian designers. They are known for their use of unconventional materials (everyday objects, scraps, and waste) to create beautiful furniture pieces.

The workshop began with a brief introduction to the series and the Campana brothers’ work. Tables were set up with various materials such as paper clips, bamboo, plastic jugs, tulle, and so on. There were about 12 of us there. We were given two hours to create whatever we wanted with whatever material that was onhand.

With a huge spread of materials to choose from, all the creative freedom in the world, and a ticking clock, naturally, I had absolutely no idea what I wanted to create. I was immediately drawn to this gorgeous teal tulle on my table. After a little while spent staring at it and fiddling around with other materials, I decided I would embroider the tulle. This didn’t exactly work out as the string was too big to fit through the eye of the needles.

Determined to make something of the tulle and thread, I decided to make a Barbie-sized skirt with a coffee filter underlay. This proved to be a very tedious process of poking holes through the filter and attempting to string a thick thread that was rapidly coming undone, through holes that were closing faster than my pierced earlobe holes could have. (Can you tell how stubborn I can be?)

By the time I finished the skirt, time was almost up. Feeling rather weird that I would be presenting just a skirt, in a few minutes I quickly threw together (something that kind of, sort of, but doesn’t really resemble) a doll using straw and rubber bands. I threw on a coffee filter tube top on her so that she would be fully clothed – no arms, but fully clothed.

Somehow, I had something to present by the end of it the end of the session. Let's hear it for creativity!