If you have not watched Bates Motel in its entirety, do not read this article until you do, as it contains spoilers from throughout the series and the series finale. 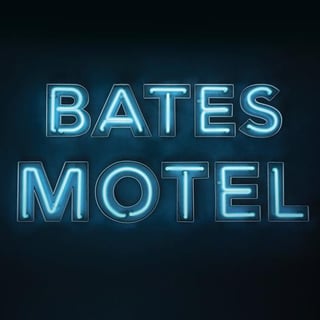 Bates Motel was an A&E series that served as an elaboration and different point of view on Alfred Hitchcock’s Psycho. It could have been described as a modern day prequel to the film until the show caught up with the film’s timeline, and there were very prominent differences that led to an unexpected ending. (More on those later.) The show had five seasons and ran from March 18, 2013 through April 24, 2017. It starred Vera Farmiga as Norma Bates and Freddie Highmore as her teenage son, Norman Bates.

Norma and Norman had an unusual mother-son relationship. This was in large part due to Norma’s troubled childhood and the fact that Norman witnessed his father abusing Norma. Norman acted like a small child with his mother, always wanting to be with her, cuddling in bed with her, and sharing everything with her. To outsiders their relationship would have appeared to be too intimate. They had their fair share of arguments, but ultimately, they felt that they could turn only to each other in times of need and desperation. Norman’s older brother, Dylan, was an outsider in his own family due to the nature of Norma and Norman’s relationship as well as the premise under which Dylan was conceived. (He was the son of Norma and Norma’s brother, who raped her as a teenager.)

Psycho introduced us to the character of Norman Bates as an antagonist with Dissociative Identity Disorder who turned into a murderer when Mother’s personality took over. In the show, Norman 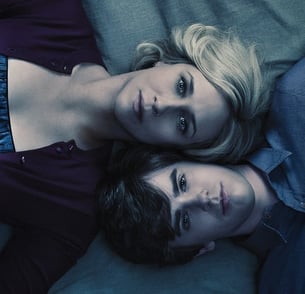 was initially introduced as a sweet, innocent, and socially awkward teenager. However, he also had “blackouts” in which his other personality, "Mother," would take over to protect him from knowing about the horrific things happening in their lives. The show portrayed Norman in a protagonist-like light and gave reason and meaning behind his mentally ill state of mind. When Norman blacked out, it was the Mother personality protecting him by killing anyone viewed as a threat. This included Sam Bates, Norma’s abusive husband and Norman’s father; Blaire Watson, Norman’s high school teacher that had inappropriate relations with him; Bradley Martin, Norman’s high school girlfriend; and Audrey Ellis, the estranged mother of Norman’s friend, Emma. Norman would have no recollection of what happened during his blackouts which led him to believe that Norma was actually killing these people. He was placed in psychiatric care for a few weeks. It was in the institution where a moment of breakthrough and honest realization came when his doctor became aware of the fact that Norman had another personality. However, Norman was adamantly opposed to being in the facility and was quick to stop taking his medication upon being released.

A tipping point for Norman was finding out that his mother had married the town’s corrupt Sheriff, Alex Romero. Norman saw the marriage as a threat to his and Norma’s tight bond. In an act of mental delusion Norman attempted to commit a murder-suicide by carbon monoxide poisoning,

but only succeeding with the murder, not the suicide. (The scene wasn’t a surprise to fans of Psycho, as they went into the series anticipating Norma's death, but that didn’t take away from the impact it had. It was one of the saddest moments in the series but the scene was beautifully coupled with Nan Vernon’s cover of the song Mr. Sandman playing.) Alex got home in time to save Norman, but not Norma. Norman was able to convince authorities that Norma had committed suicide and around the same time Alex was arrested for

perjury. In prison, Alex focused on getting back at Norman for murdering Norma. After two years, he came up with a plan to escape during a requested transfer and executed it despite road bumps (he got shot while trying to steal someone’s car). During those two years Norman continued to live at home and run the motel while also believing that his mother was with him (technically she was, because he dug her out of her grave and kept her body in a cellar in the basement). Just before Norma’s death, Dylan and Emma moved away and broke off contact with Norma and Norman because Dylan knew that Norman was mentally ill and potentially dangerous, and Norma wouldn’t do anything about it. Dylan and Emma got married and had a baby and were living quite comfortably until Emma found out online about Norma’s death. When she told Dylan, he realized what Norman did, so he left for White Pine Bay to confront his brother.  During the confrontation Norman struggled against his Mother personality for control and won long enough to call the Sheriff to report that he murdered Sam Loomis - a murder he committed in his own state of mind. (Sam took the place of Marion Crane, played by Janet Leigh in Psycho and Rihanna 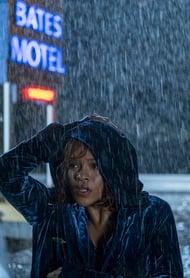 in Bates Motel. The iconic shower scene in which Norman stabs Marion to death in Psycho was changed in the show to Norman letting Marion go before his Mother personality convinces him to kill Sam for cheating on his wife, whom Norman had befriended. This shocking twist was when viewers realized the show was not a prequel, but rather an altered retelling of the tale with more backstory.) Norman moved his mother’s body to a place in the woods because he knew the police would come to search the house. Once Norman was in jail and charged with murder, Mother took over indefinitely to try to see him through the situation. In the second to final episode Alex kidnapped Norman from jail and demanded that Norman take him to Norma’s body. Season 5 was the planned ending point to the storyline from the start and led up to the finale in just the right amount of time.  As for the finale, it was executed perfectly.

Norman Bates checked viewers out of Bates Motel with a bang (literally – he shot and killed Alex Romero within the first 10 minutes of the series finale). After taking Alex to Norma’s body, Norman kills Alex while still under the influence of his Mother personality. Immediately following Alex’s death, Norman must have passed out because he is seen waking up lying between Norma and Alex. Norman envisions his Mother personality saying that her work is done and she’ll be leaving him now. Norman brings Norma’s body with him back to his house and during the trip home Norman is remembering and reenacting conversations he had with Norma from when they first moved to White Pine Bay. It shows flashbacks of the two while also showing Norman in his present state. When he arrives home Norman calls Dylan to invite him over for dinner to celebrate the move. Dylan realizes that Norman is delusional in this moment but doesn’t realize just how much until he arrives for dinner and sees his mother’s body at the dining room table. Dylan tries to reason with Norman and remind him of reality, but Norman vehemently denies it. Ultimately Norman’s refusal to accept what has happened and Dylan’s insistence that he try, makes Norman pick up a knife. Dylan pulls a gun on him but tries to get Norman to set the knife down. Norman says all he wants is to be with his mother; he does not want to live without her. He charges toward Dylan with the knife but Dylan shoots him as he dodges the blade. Norman dies in Dylan’s arms, and as images of him being reunited with Norma are shown intermittently between images of him being held by his brother, his last words to Dylan are “thank you.”

The final episode of Bates Motel was anti-climactic but the perfect ending to the series, as it brought Norman’s life and story full circle. In the film Norman does not die so his demise was not anticipated the same way Norma’s death was. The final scenes in the episode were beautifully shot and the look of joy on Norman’s face as he is reunited with Norma in his imagination while in reality he is being held by a crying Dylan makes it an almost happy ending. The shot pans out to show Dylan holding Norman after his last breath with Norma’s body nearby at the dining room table. Fans can only be happy for Dylan once they realize the heavy burden that has been lifted from him. Free from his dysfunctional family, he is now able to live a happier life with Emma and their daughter, as shown as one of the last shots of the series, only followed by the image of Norma and Norman’s shared grave.