Erik said he rose through the ranks after beginning as a stock boy as soon as he was old enough to work. He made his career in women’s shoes, the most important category and “where men were made” at Nordstrom, rising to a department buyer-manager position before heading to the corporate offices.

Nordstrom was founded as a shoe store in 1901, then named Wallin & Nordstrom after its original founders. Nordstrom eventually became the largest shoe store in the country. To foster its growth in the first 63 years (before expanding into other product categories), Nordstrom competed with its broad assortment of brands. Today, the effect of this is seen in Nordstrom’s unique position with a selection of brands that ranges from mass market to luxury.

The retailer’s number one goal is—and always has been—customer service, according to Erik. Nordstrom recognizes that it must cater to and serve customers rather than trying to change them. This is exemplified by the company’s famous tire story, in which a new Alaskan store accepted a return of tires (despite the fact that the company does not sell tires) that were purchased from the retailer previously occupying the location. Although some retailers feel that such policies would result in customers taking advantage of them, Nordstrom emphasizes that the company and its customers should respect each other.

Nordstrom has a unique organizational chart that is referred to as an inverted pyramid. Customers are on top, followed by store salespeople, with store management and merchandisers above executives and the board of directors. 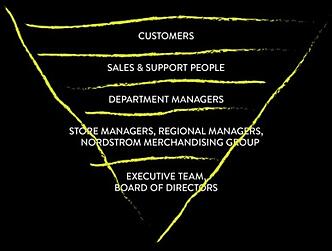 The idea comes from Nordstrom’s policy of putting the customer above all else and giving those closest to the customer the tools they need to succeed. This is exemplified by a story Erik Nordstrom told about a shoe salesperson named David. After a promotion to a buyer-manager position at a larger Seattle area store, Nordstrom was shocked to find that David earned more in the last year (thanks to a 10% commission rate) than Erik’s new salary. This was the moment in which Erik understood the inverted pyramid: David was so good at his job that women would come in specifically to see him, and Erik understood that his job was to provide David with the tools he needed to make these sales.

Today, Nordstrom’s omnichannel experience includes full-price and off-price retailers in brick and mortar and online channels. Off-price sister store Nordstrom Rack launched its website last spring. Although most of the company’s revenue is generated by the Nordstrom stores, the majority of the growth is in other channels. Nordstrom works with many of these vendors in multiple channels, an efficient process which benefits the retailer and the brands. 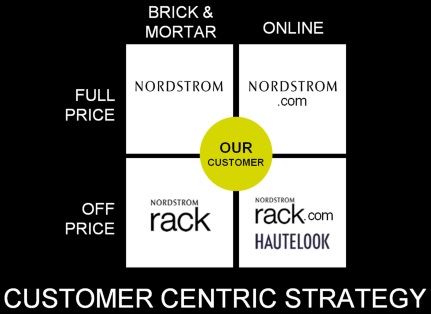 Nordstrom itself is actually a leader in full-price sales, which makes its foray into the off-price sector particularly notable. One audience question brought up the Seattle flagship store and its location right near a Nordstrom Rack. Instead of cannibalizing one another’s sales, Nordstrom actually saw an increase in revenue for both retailers after this move (even though Rack had only moved a few blocks). This is because many consumers shop in full-price and off-price channels; synergy between brands often leads customers to be converted from shopping at Nordstrom Rack to making purchases at the full-price store. Nordstrom hopes to recreate this synergy elsewhere.

Nordstrom has been increasing its focus on acquisition and partnerships, only becoming involved with brands that have the same customer-centric values and offer features, services, and/or products that appeal to consumers. The company acquired flash sale site Hautelook after realizing that the flash sale format is valued by customers. The company has invested in men’s fashion pioneer Bonobos and children's brand Peek. In an attempt to gain market share in fast fashion, Nordstrom began an exclusive partnership with Topshop (as the only American third-party retailer to sell its products), a brand with which Nordstrom has a “shared vision of the customer.” Another recent acquisition was Trunk Club, an online subscription-based men’s outfitter for high quality fashion that achieves personalization and convenience through customer collaboration with personal stylists.

Erik spoke extensively about the unique challenges presented by the rise of e-commerce. The definition of service has expanded from experiences provided by workers in retail stores to operations and technology that can improve speed and convenience across channels. Technology has given customers more information and control; as a result, they “expect to shop on their terms.” There has also been a change in communication between the brand and customers, mostly due to the

In September, Erik nodded to its importance with an “Instalog,” a social media-based accessories trend catalog that was a result of a collaboration between the retailer and online influencers. Erik also noted the importance of offering a consistent experience across channels as the lines are increasingly blurring, with most online returns being done in stores and the primary source of web traffic being research. Integration between channels is an important point of difference. One possible way to integrate is the ability to leverage alterations online, giving consumers the opportunity to visit skilled alterations people in the stores. "Dresses" is an important category online, but often customers will purchase multiple sizes to try on and make returns. Returns are always a challenge for retailers online, though Nordstrom is optimistic that returns often bring customers back into the stores, which increases the potential for further sales and reduces costs.

It’s no secret that department stores have been largely unappealing to millennials. Erik admits that, in retail, “You age with your customers.” Although it’s important to note that baby boomers hold a significant portion of the country’s wealth, Erik pointed out that older customers spend a smaller percentage of their income on fashion goods. Nordstrom has a constant reminder of the risk of becoming irrelevant; its flagship Seattle store is located in a former Frederick & Nelson store, which Erik once referred to as an “old person’s store.” To gain millennials’ business, Nordstrom has been opening fewer full-price stores and investing in technology. The company has been trying to innovate its online presence as a component of the shopping experience, especially encouraging the increase of mobile use in stores.

And if you haven't heard, Nordstrom is finally coming to Manhattan in 2018. After several signed deals fell through over the last few decades, the new location is being constructed on West 57th street. Although the only retail hub nearby is Columbus Circle, Erik is confident that Nordstrom will be an anchor store, encouraging more retailers to flock to the area. In the anticipated shoe war with Saks and Macy’s, two department stores known in New York for impressive shoe departments with price points on either side of Nordstrom, the former footwear-only retailer plans to compete on assortment and service, not with a gimmicky zip code or the most square footage. [Editor's Note: Erik may have purposefully left out mention of plans, announced the same week, for Nordstrom to collaboate with Austrian custom shoe design studio Shoes of Prey in its flagship stores, which could be that point of difference Nordstrom needs to crack the New York market.] 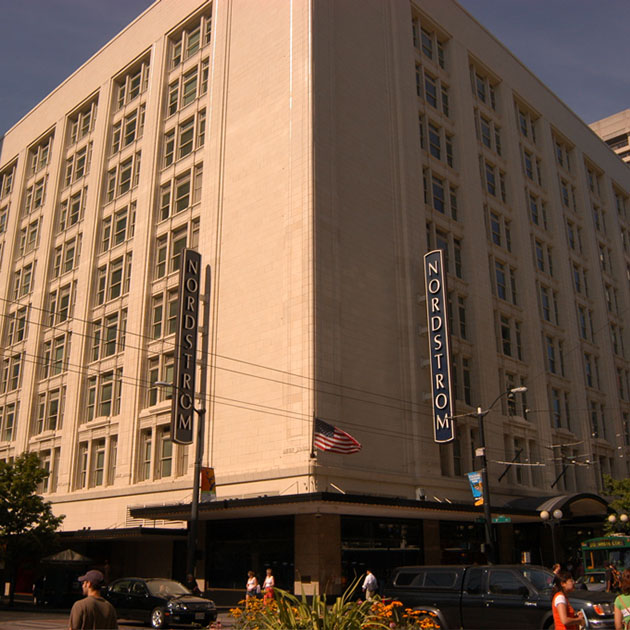 Nordstrom has traditionally hired from within, giving preference to retail store employees and interns. However, the company is increasingly hiring from outside, especially for e-commerce businesses, as these businesses require skills that salespeople and store managers may lack. In fact, he encouraged future applicants to have varied experiences, saying that a common mistake is to be too narrow and specialized early in one’s career. Uncomfortable work experiences can be great learning opportunities, which will lead individuals to see the consumer experience from multiple perspectives. Erik likened the e-commerce channels to startups, where there is less stability and a focus on the future. Integration must be accomplished through collaboration and teamwork, rather than by following an organizational chart, as the future of retail relies upon working in the grey area between stores and ecommerce. Although LIM students, most of whom have grown up in the tri-state area, may be hesitant to move tohte company's headquarters in Seattle, the west coast city is “a good place to be for ecommerce talent.”