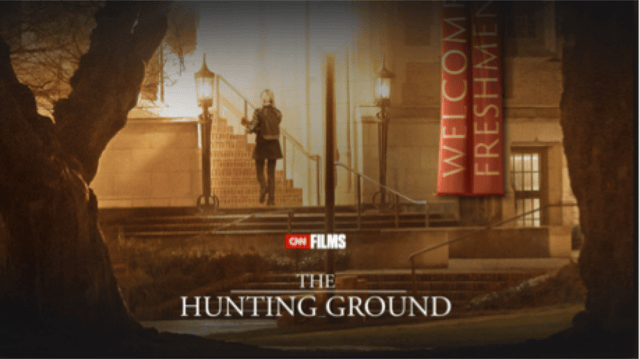 College, described by most as some of the best years in their lives. Being out on your own, frat parties, tailgating, Saturday afternoon football games, are just some of the festivities that college students look forward to as they are entering a new chapter of their life. Being unconscious, unable to move, and unable to fight for themselves is something that they don’t anticipate when coming to college.

“One in five women in college are sexually assaulted, yet only a fraction of these crimes are reported” (The Hunting Ground Film, 2017).

From the creators of The Invisible War, The Hunting Ground is a documentary that exposes rape culture on college campuses. The film captures the stories of men and women of experienced sexual assault on their college campus and the difficulties they faced while attempting to report it to their school. 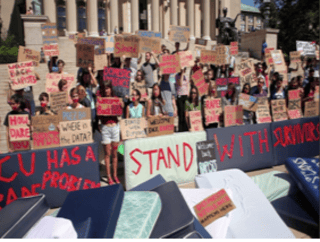 The Hunting Ground shined light on the actions of administrators at schools such as Harvard, The University of North Carolina at Chapel Hill, Amherst College, and Notre dame as well as fraternities such as Sigma Alpha Epsilon. The film also follows two survivors, Andrea Pino and Annie Clark, who use Title IX to take action against their school and assist other survivors with doing the same. Andrea experienced her sexual assault within her first semester at The University of North Carolina at Chapel Hill.

“We didn’t talk about it because it was something that we didn’t talk about” she says. “Rape is a scary word, you don’t want to fall into a category, you don’t want to called a victim.” Annie Clark remembers hers in a similar way, “The first few weeks I made some of my best friends, but two of us were sexually assaulted before classes even started.”

Although the film may be difficult to watch while listening to all of these cases on sexual assault and the mistreatment of the victims, the most difficult part to watch were the statistics. There are various statistics sown throughout the film, but there is a point where filmmakers show the numbers of the amount of sexual assaults reported and compare them to the amount of expulsions that come from it. For example, from 2002-2013 The University of Virginia had 205 reported sexual assaults and no expulsions from it; however, the school had 183 expulsions from cheating and other honor board violations. You can watch the clip to the statistics here: College Sexual Assault Statistics via "The Hunting Ground".

I believe the filmmakers did an amazing job in exposing this topic and exposing some of the top schools involved. Sexual assault in general is such a sensitive and controversial topic for anyone to speak on and the filmmakers really gave the victims a platform to tell their story. Something that I also like was that the film didn’t shy away from mentioning the schools that were involved, even ivy leagues such as Harvard University and Yale University. As expected, the film came with very heavy criticism. The film was challenged by the schools that were mentioned, one of the alleged attackers, and even the accuracy of one of the testimonies was challenged. Despite its many controversies the Producers Guild Of America nominated the film for the “Outstanding Producer of Documentary Theatrical Motion Picture” award. It was one of the fifteen documentary films shortlisted for an Oscar nomination in the Best Documentary Feature category in 2016 and won the Stanley Kramer Award.