In case you missed it, the 14th season of Grey’s Anatomy premiered last week. The long-awaited return of the thankfully never-ending series was filled with everything you could want from a Grey’s Anatomy season premiere. It’s full of happiness, frustration, sadness, confusion, and everything in between. So, if you did miss it, I'm here to fill you in.

The two-hour event continues right where they left off during the season 13 finale. Megan, Owen Hunt's long-lost sister, had been flown onto the roof of Grey-Sloan Memorial Hospital after being discovered to be alive. When the staff brings her into her hospital room, Nathan follows suit, excited to see the woman he loved for so many years prior to meeting Meredith.

When he hugs her, she’s in pain. The pain is revealed to be caused by a large abdominal wound suffered from a bomb in Iraq. The wound had been infected after surgery, and therefore was open. Because the wound is so complex, Bailey and Dr. Webber are worried that they don’t know how to help Megan. Thankfully, Meredith Grey comes up with a surgery to reverse Megan’s colostomy, and although it’s risky, Megan wants to go through with it, revealing that she has a child in Iraq who she took in after his parents died in combat. 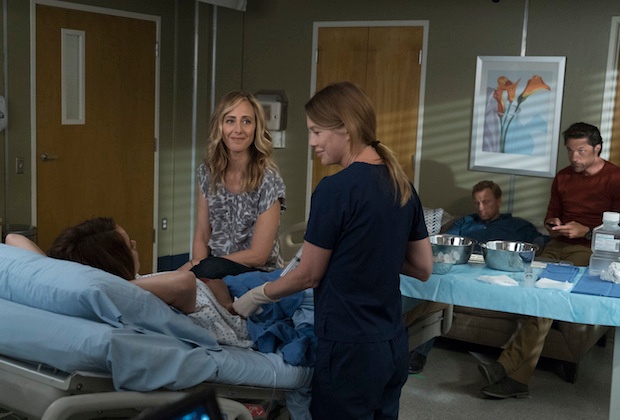 While Meredith’s great surgical plan is appreciated, Nathan Riggs is concerned about whether or not her working on Megan is a smart idea, and he’s not the only one. While in line for coffee, Owen hears a familiar voice and turns around to see Teddy Altman’s back. After hearing about Meredith’s history with Nathan as well as her being Megan’s surgeon, Teddy also becomes concerned about whether or not Meredith is the appropriate surgeon for this case.

Meanwhile, Bailey leaves Dr. Richard Webber to deal with the group of fourth year medical students that Eliza Minnick, newly fired, had been training to become interns. However, Dr. Webber isn’t impressed with the students when one of them records all her notes through voice recording, one of them faints at the sight of blood, another one drops his glasses inside a patient during surgery, and they all take notes by typing them on their phones.

Because their operating rooms remain unstable due to the fire, the residents are left bored without surgeries, and Alex Karev takes this opportunity to give Jo Wilson an important pediatric solo surgery in hopes to get her back. This stirs up old and new emotions towards Alex. She’s often lost thought about surgical resident Stephanie Edwards, who would always be the one that pushes her to be better, looks out for her, and listens to her problems. During this time, she finds a new friend, Ben, and while he quickly refuses to be her replacement Stephanie, he still listens as she wonders if she’s still in love with Alex. She tells him that she’s afraid of Alex because she’s seen what he’s violently capable of. Yet, she thinks she still loves him, so she sleeps with the med student who’s glasses are always an issue, in order to keep herself from running to Alex.

Later, Arizona Robbins goes to see Minnick to help her feel better about being fired. When no one answers after she continuously knocks and talks to the door, she walks into the apartment to find men packing and labelling boxes. There’s no Minnick. Heartbroken, Arizona finds comfort at Joe’s Bar when an attractive woman with an accent approaches her. They end up leaving together, only for Arizona to later find out that she’s Andrew Deluca’s older sister.

Between Owen, Amelia Shepherd, and their marriage, tensions rise when Teddy steps back in. Amelia immediately threatened by the woman who is in love with Owen. Her head clearly is not in the right space, but she commits to an extremely risky procedure that Jackson Avery has argued against multiple times. When Jackson refuses to help, she goes along with the procedure anyway, but is later forced to ask Jackson for help to fix her surgical complication.

At this time, Meredith is having conflicts of her own; she needs to talk to Alex and Megan. She talks to Alex about being honest with Jo about hiring someone to find Jo's husband. Meredith then realizes that he’s trying to get her back and gives him advice, telling him to be honest with her in order to get her back.

She also does what Teddy asks and talks to Megan about her history with Nathan to help Megan properly make a decision about the risky procedure. Megan doesn’t change her mind and goes through with the surgery. However, at the end of the surgery, Meredith can’t close because there’s not enough tissue. Breaking things because she’s frustrated that she couldn’t successfully complete the surgery, she shows a personality that Richard recognizes as Ellis’s. This frustration forces her to take a different approach, and she finds a way to help Megan. 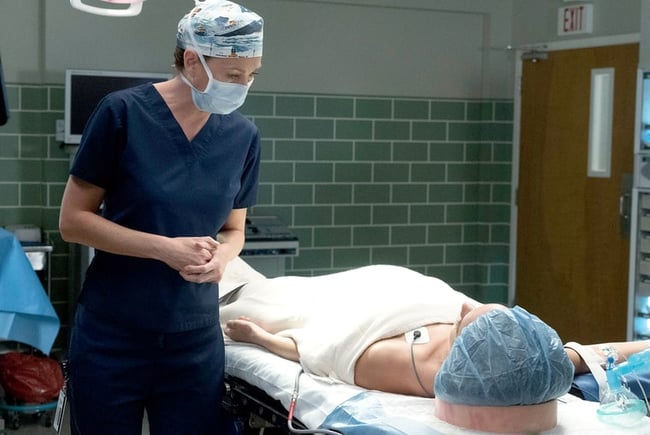 Before the final surgery, Nathan proposes to Megan, but Meredith walks in during the middle of it to get her for surgery. The surgery goes without complications, receiving a round of applause from everyone watching, including Richard, who is seeing Ellis in Meredith with every decision she makes. Megan, because of Meredith, is able to recover quickly and returns to Iraq, but not with Nathan. Nathan tells Meredith that Megan doesn’t want to be with him because she thinks he’s still in love with Meredith. In response to this, Meredith just walks away.

Around the same time, Ben tells Alex about Jo’s fear of him. He notes that girls keep their secrets to protect each other, but he couldn’t do it. After the surgery, Alex talks to Jo about him finding her husband. He confesses that he found him, but he didn’t hurt him. He talks to her about her fear of him. He says that her ex-husband is like his father and that he would never be like his father. When Jo realizes that he isn’t the violent person she thought he was, they make up.

At the end of the episode, Owen talks to Amelia after being confronted about his marriage by Meg, his mom, and Teddy. They all notice how she is distant. When he talks to her, he confesses that he thinks she still has PTSD from Derek’s death and suggests medication or therapy. She gets offended by this, and dismisses the conversation with an excuse of needing to focus on her risky procedure. She finds Andrew’s sister, Carina, who is working on a study in the hospital. She volunteers to help, but while helping, Andrew and Carina find a tumor in her brain.

Meanwhile, Owen is talking to Teddy about his conversation with Amelia. He explains how she doesn’t want to be with him anymore. Him and Teddy then kiss before she steps back and tells him that before they can be anything, he’s her husband and needs to deal with that.

Tune in for more recaps with from Caitlyn Mae!