NBC’s The Tonight Show franchise began with Steve Allen as host on September 27, 1954.
Jimmy Fallon is the current host who brought the show back to its roots in New York City in February 2014.Over 60 years and 6 hosts later, Jimmy Fallon has taken the franchise from late 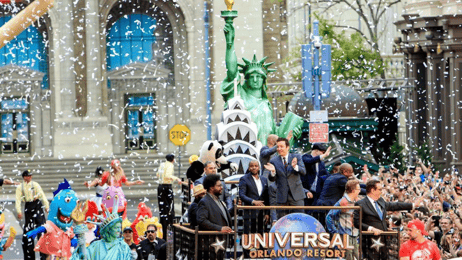 night television to a theme park ride. On Thursday, April 6, 2017, Race Through New York Starring Jimmy Fallon had its grand opening at Universal Studios Orlando. Jimmy Fallon, The Roots, Steve Higgins, and everyone else from the 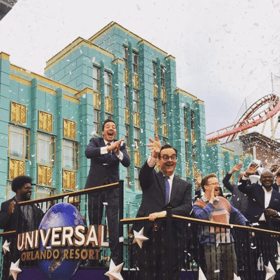 show were on location in Florida for the grand opening. The social media teams for both the show and Universal broadcasted live feeds of the event on Facebook and Instagram while the Today Show broadcasted the event live on television. Jimmy was joined by his wife, Nancy, and their daughters Winnie and Franny to celebrate the opening. Surrounded by fans, staff, and theme park employees dressed as iconic characters from recurring bits on the show, Jimmy thanked Lorne Michaels, The Roots, Steve Higgins, the show’s writers, his predecessors, the creative team behind the ride, Universal executives, and Universal employees before cutting the ribbon Thursday morning. 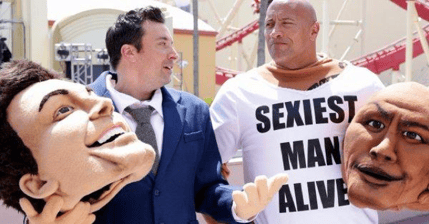 The week of the opening the show taped episodes at Universal. The only previous time the show went to Orlando was in June 2014. Jimmy spent the week inviting guests like Dwayne Johnson, Vin Diesel, Nicole Richie, Pitbull, Kate Upton, previous Tonight Show host Jay Leno, Blake Shelton, and Shaquille O’Neal to join him on the show, around the theme park, and on his new ride. Segments included a lip sync battle with Shaquille O’Neal, riding Race Through New York with Blake Shelton, and Celebrity Photobomb with Dwayne Johnson. 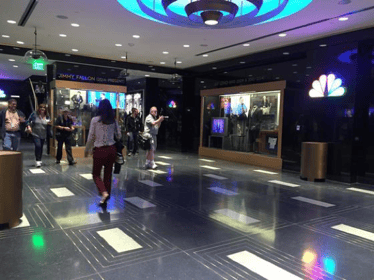 The ride takes the place of Twister which closed for the construction of Race Through New York shortly after Jimmy announced the news on the show back in October 2015. A 3D simulator, the ride takes guests from Studio 6B – home of The Tonight Show – through New York venturing between iconic places like The Statue of Liberty, the Empire State Building, and the East River. The exterior of the ride has been made to look like 30 Rockefeller Center in New York and has everything from the walls to the flooring identical to that of The Tonight 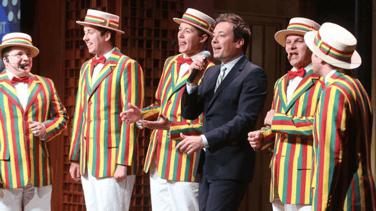 Show’s New York home base. The employees greeted guests as they enter the building are even dressed like NBC Pages who work closely with the audiences in New York. The first of its kind, the ride also features a virtual line. Rather than stand in a queue guests have the option of meandering around the two-story area made to look like the 30 Rockefeller Center lobby and Studio 6B. Things to do include interactive desks, a homage to previous hosts in a Tonight Show museum, and entertainment provided by Tonight Show fan favorites The Ragtime Gals and Hashtag the Panda. 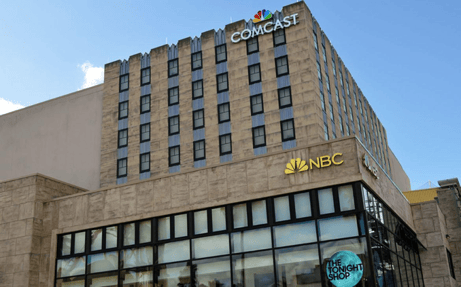 Just like any other theme park attraction, there is also a gift shop appropriately called The Tonight Shop. Jimmy worked closely with Universal and their creative teams in the beginning stages of product development. The Tonight Shop offers exclusive merchandise featuring the Race Through New York logo as well as merchandise with The Tonight Show logo that can also be found in The Shop at NBC Studios in 30 Rockefeller Center.

As Jimmy and his team wrap up their time in Orlando, the excitement will continue both at the park and on the show. This is just the beginning of Jimmy’s reign as Tonight Show host and there’s no sign of him slowing down. The next time you find yourself in Florida make a point to check out the immersive ride that transports riders to the Big Apple to experience The Tonight Show from a perspective that could only be thought of and created by Jimmy Fallon and his team.