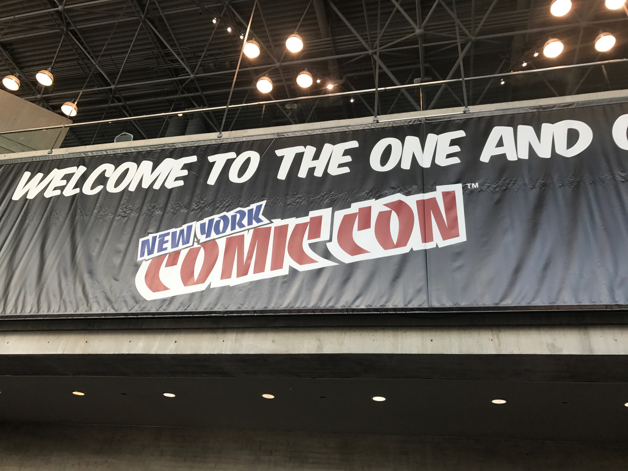 I’m very excited to announce that my first time attending New York Comic Con was a success! Most people probably think that Comic Con is for the “nerds” and that the show floors are filled with Batman, Superman, Wonder Woman, Harley Quinn, Star Wars characters and all of these comic book icons mingling together. Though that’s true, it’s less than half of what you’ll see.

Think about what has been trending this past year. If you go to NYCC 2017, I guarantee you’ll be seeing attendees dressed up as Rick and Morty, Pennywise from IT, Eleven from Stranger Things, characters from Marvel’s The Defenders, Game of Thrones, Tim Burton movies, and Harry Potter. And when it comes to cosplay, gender is not a boundary!

Gamers unite! Among the gamer cosplayers were Jesse McCree, D.va, Junkrat, and Road Hog from the game of the year, Overwatch, Link from the Legend of Zelda, Nathan Drake from Uncharted, and Max and Chloe from Life Is Strange.

Comic Con is for the creators, the artists, the writers, the actors, the vendors, and the geek in all of us. I promise you, being a geek is cool. 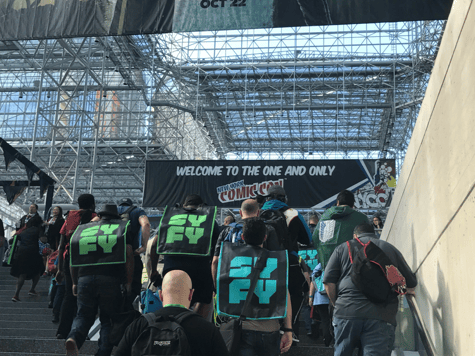 TIP: Are you excited? Get there early, it’s worth it! You can walk the floors while they’re still pretty empty! Plus, while waiting in the queue for the Javits Center to open its doors, you can get a nifty bag courtesy of the SYFY network, which is perfect for carrying everything you pick up on the show floor! That includes free pins, flyers, and purchases. 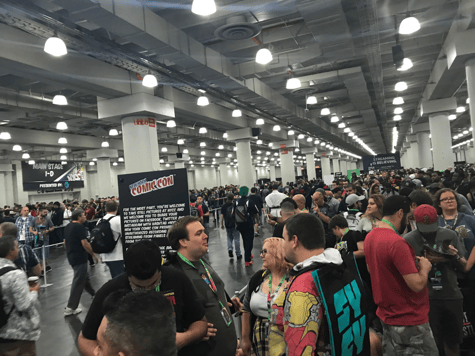 The main stage was hosting a panel for Peter Capaldi and Pearl Mackie of Doctor Who. The far line was for the panel, and the line we were in was the queue for the show floor. 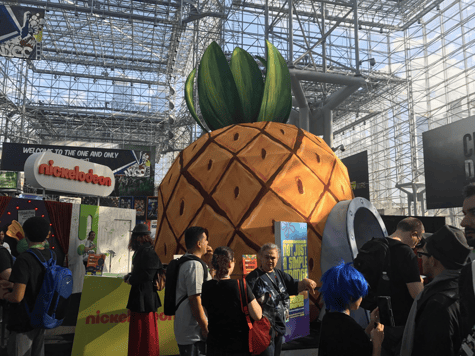 Fan of Nickelodeon? You can take a picture in Spongebob’s house! Just for the record, it was a very long line! But this was a promotional event for us 90’s kids! Hey Arnold!: The Jungle Movie dropped its trailer at New York Comic Con, and will premiere on Nickelodeon on November 24th! 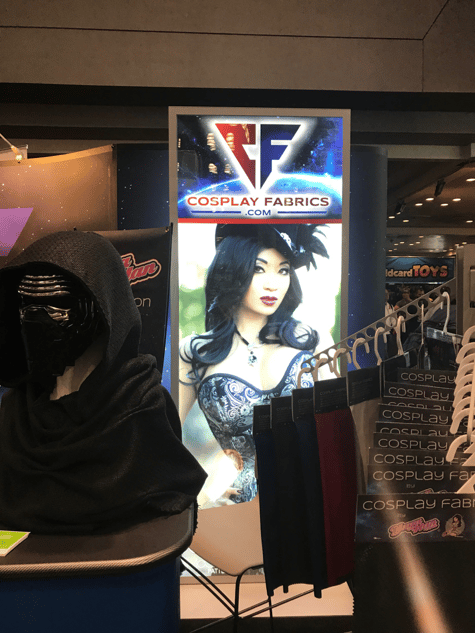 We’re Fashion Students! That’s right, cosplay is all about the fashion of Geek Culture. Cosplay Fabrics, Arda Wigs, Manhattan Wardrobe Supply, and Symphony Blush were among the booths selling makeup, fabric, wigs, and cosplay supplies for those of you wanting to embrace your favorite characters! So, if you feel like dressing up as Ariel for halloween, visit cosplayfabrics.com for fabrics with scales! 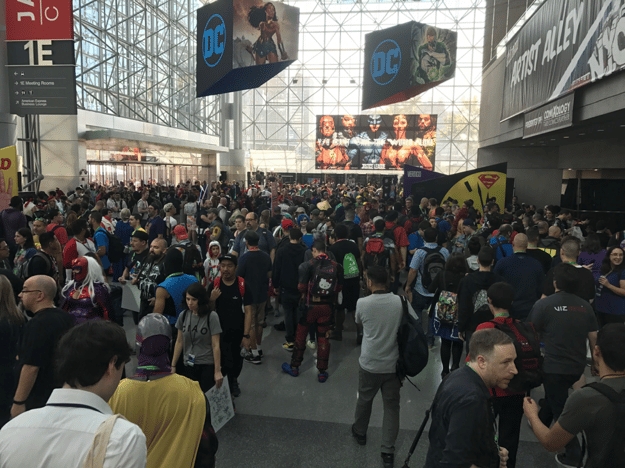 The show floor just above Artist Alley, packed with fans! Recognize any characters? 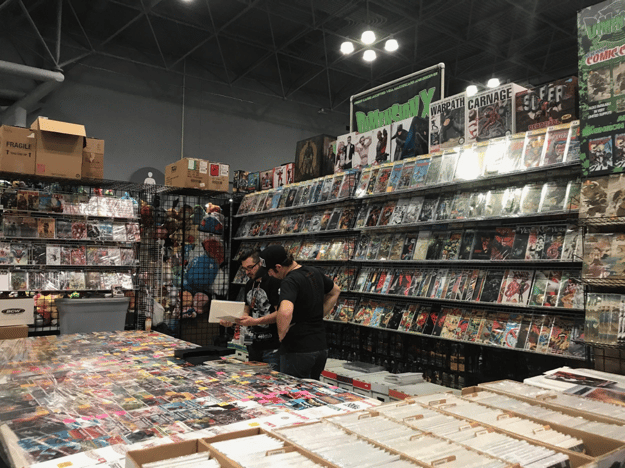 Are you a fan of comic books or graphic novels? DimensionX (pictured), Dark Horse Comics, Midtown Comics, IDW, Image Comics Inc. were there for the newbies, collectors, and fans alike. 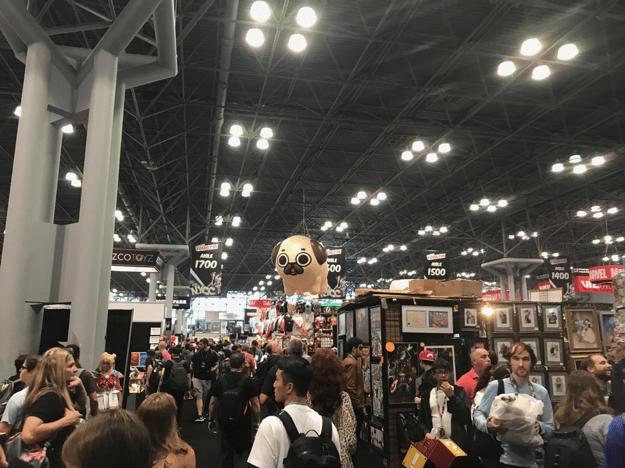 Vendors Galore! Movie posters, publishers, vintage gaming booths, and yes, comics were packed about the vendor floors. Fair warning: don’t expect to move too quickly, everyone is stopping to look at something or take pictures. And just to clarify, that is a giant floating pug. 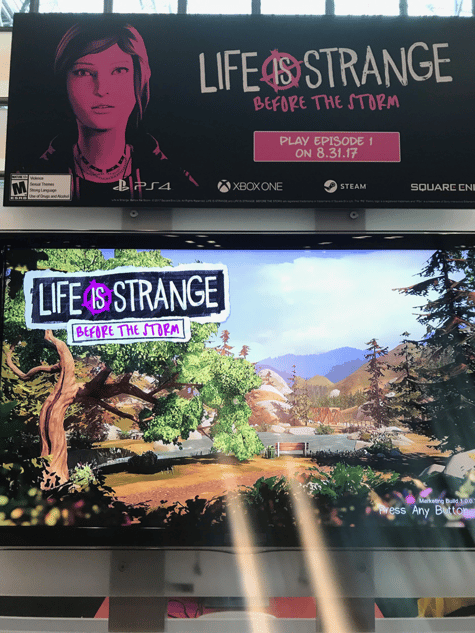 Opportunity Knocks! You can head over to Square Enix and play the first episode of the Life is Strange prequel, Life is Strange: Before The Storm. The game is available on Xbox, PlayStation, and Steam.

Keep Your Eyes Peeled! You never know who’s going to be walking the show floors! The one and only Luke Skywalker, Mark Hamill, made an appearance and crashed an autographing session for some beloved voice actors and overjoyed fans! 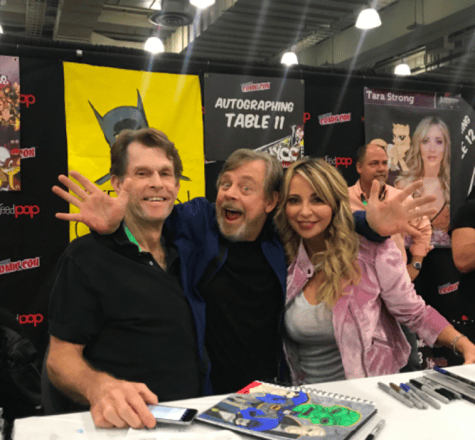 From Hamill’s twitter (Pictured is Kevin Conroy the voice of Batman, Mark Hamill, and Tara Strong, the voice of Timmy Turner) 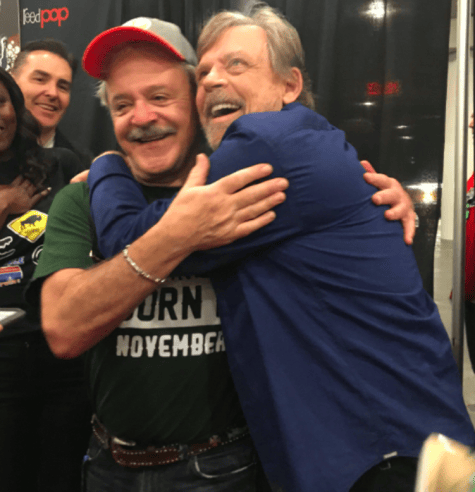 My Experience at Comic Con 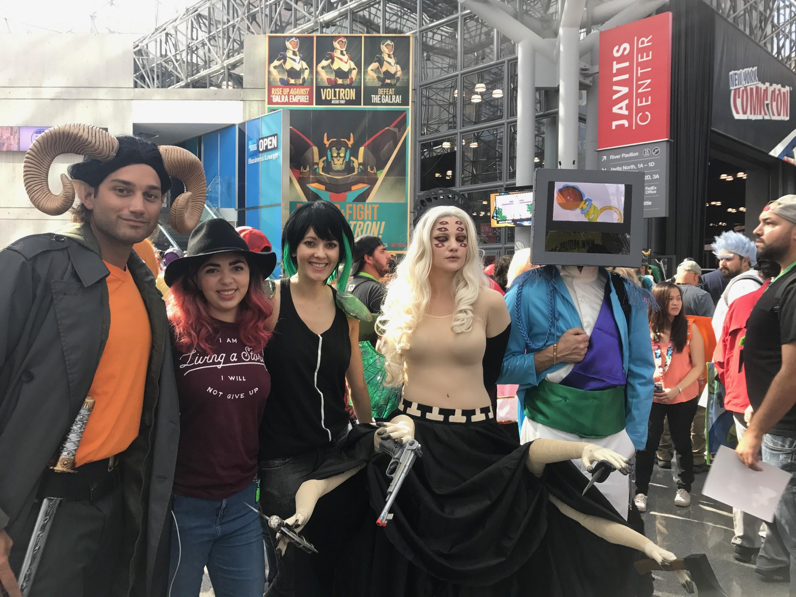 Walking the show floor means getting to see talented artists, creators, and fans just like you. Above is me and a group of cosplayers dressed up as the characters from the Image Inc. comic, Saga.

Keeping The Memories With You

Before I leave you, I want to talk about something that means the world to me. I was able to meet a true inspiration that day. The reason I’ve begun writing again is because of the musician and voice actor Troy Baker, whose work I've enjoyed and someone I've looked up to for a long time now (The voice of Joel from The Last of Us, Sam Drake from Uncharted, The Joker in Arkham Origins). I was able to speak with him, which turned into an in-depth conversation, and to thank him for being that push I needed to begin writing for the first time in close to four years. In fact, that conversation is what has driven me to write this article. 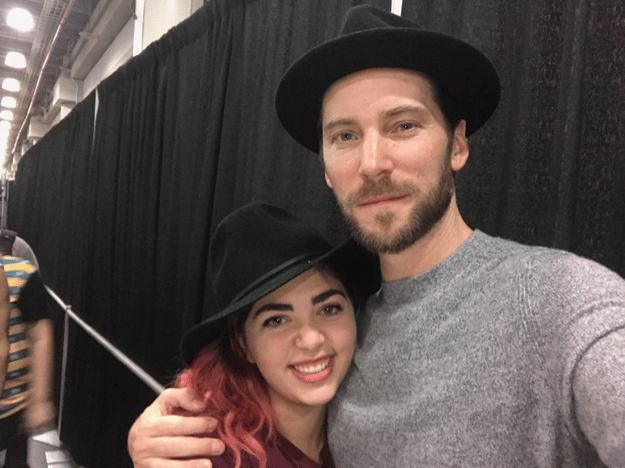 Here’s what he said to me; “As creators, we’re always going to beat ourselves up over our work because we don’t think it’s good enough. But what you need to do is write like a madman, then critique it, edit it, and then go back and do it again. And you keep doing it.”

A Message to Keep Us Going

I asked him to write in this little journal I carry around, anything he’d like, and I’d like to share it with my fellow creators. So for those of you who are afraid that you won’t fit in, or are afraid that you won’t stand out, remember that there are so many people out there just like you. It might take some searching, but you never know what you’ll be exposed to and what advice you’ll receive. 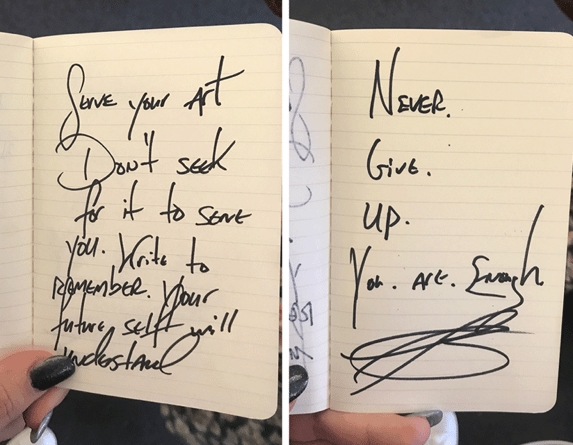 “Serve your art. Don’t seek for it to serve you. Write to remember. Your future self will understand. Never. Give. Up. You. Are. Enough.”

Take the chance and do something you never thought you’d be able to. Going to  Comic Con as a fan has opened my eyes. I’ve learned that there are people just like me who want to put their best creative foot forward and share their work with the world. If you’re ever given the chance, attend Comic Con with an open mind because you really never know what you’re going to see and who you’re going to meet.