On Nov. 4 I had the pleasure of meeting Mr. Stephen Burrows, one of the most innovative and creative American fashion designers ever.  This opportunity came through the “Fashion Insiders” speaker series. It was the final event.  Luckily, I was able to attend every one of the three speakers’ talks and meet all three of these amazing people.  They had so much to share and all three were very different in their experiences, advice and expertise. 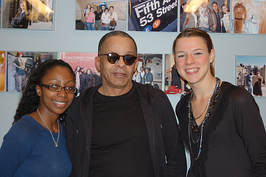 The night started off with a video about Mr. Burrows which highlighted his design career since his start in 1963 until very recently in the 2000’s. The video was extremely interesting because, I’ll admit, I had little knowledge of this designer before the event.  The video showed the beginning of Mr. Burrows’s career in the early 60’s, through his extreme popularity by the mid-70’s, and his ongoing work all the way until the present.

One thing I found so interesting throughout the entire video was Stephen Burrows’s massive amounts of creativity.  Although you may think that all designers are very creative, and you’re right, they are, the amount of creativity displayed in every piece of clothing created by Mr. Burrows is astounding. Nothing is too over the top or too colorful or too unique for Stephen Burrows, and that is exactly how it is supposed to be.

Another thing that jumped out at me was Stephen Burrows’s relationship with his business partner.  It was extremely important to Mr. Burrows that he have someone at his side that was good at the management aspect to help keep his business going, because he knew that without that partnership his business could never succeed.

Following the video there was a short question and answer session. Overall, I learned a lot about Mr. Burrows and I am extremely glad I went to hear him speak.