While strolling to the LIM College Townhouse one Wednesday morning for class, I spotted an elderly man, a blue bicycle placed against a fire hydrant, and a Nikon. I remembered one of my Visual Merchandising professors, Ron Knoth, who, sadly, passed away, and recalled him once speaking of an elderly man who rides around the city on a bicycle dodging taxis and tourists and taking pictures of street fashion.

It was just one of many lessons I learned from Professor Knoth. So, while standing next to the brazen man who was snapping photos on the sidewalk of 57th Street and 5th  Avenue, I quickly grabbed my iphone and Googled: “famous photographers in Manhattan.” Immediately his name and picture came up - Bill Cunningham.

I’m a strong believer that everything happens for a reason and though I’m usually quite shy (at times!), I decided I would introduce myself to the man who Professor Knoth had once spoken highly of. He seemed preoccupied as I approached him, introducing myself as a fashion blogger and a “huge fan.”

I then proceeded to ask him a few questions, followed by, “Can I take your picture?!” He seemed quite offbeat, and it wasn’t easy to know what on earth was going on within his head. Finally he responded, “Yes. I’m working.” 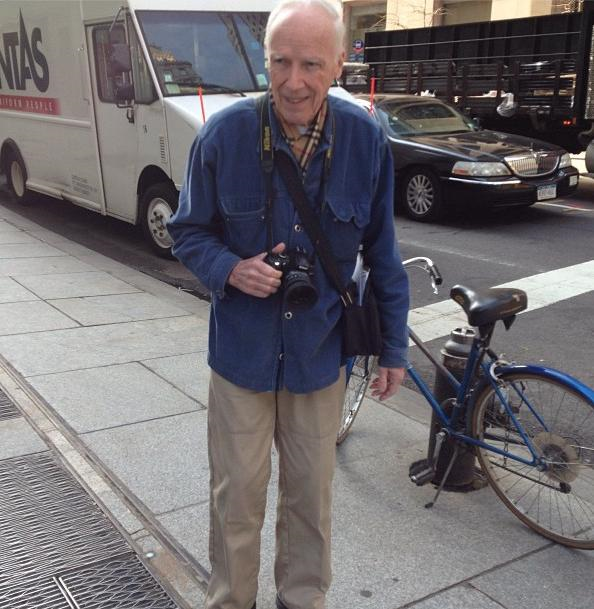 After snapping a picture, I thanked him and walked away feeling that he was abrupt, and I felt quite ridiculous for introducing myself to him in the first place. That was until later, when I got home and immediately wanted to know more about him.

I wanted to know who he was and how he became a famous photographer for the New York Times by riding around on a bicycle and snapping photos. After Google informed me that there was a documentary film about him, I felt obligated to watch it. Wikipedia can only teach you so much (sometimes even the wrong stuff!), so after discovering there was a documentary about him I rushed to rent it.

That’s when I found out who the real Bill Cunningham is. Despite reading about him, researching him and looking at pictures of him sitting front row at fashion shows all over the world, I wanted to learn more.

Bill Cunningham New York is a documentary film that was released in March of 2011. I learned that for decades Bill has been chronicling fashion trends and high-end charity soirees for the New York Times Style section in his two columns, “On the Street” and “Evening Hours.” The documentary gives you insight into Bill’s everyday life and features Anna Wintour, Tim Wolfe, Brooke Astor, and David Rockefeller. At 84 years of age, it’s astonishing to me that Bill continues to ride around on a bicycle.

“Fashion is the amour to survive the reality of everyday life,” the veteran photographer says. He lives a humble life, avoiding celebrities  (including the opportunity he once had to photograph Marilyn Monroe) and money and for years lived in a single-room apartment within Carnegie Hall.  “If you don't take money, they can't tell you what to do. That's the key to the whole thing," he has said. The crammed living space he was in at the time was full of files containing photographs and a small bed. He lived without a kitchen, a private bathroom, and a closet, wearing bland cookie-cutter apparel each and every day.

Any fashionista knowledgeable about Mr. Cunningham would swoon at the opportunity to be acknowledged by his lens. “We all get dressed for Bill,” says Anna Wintour, and since my little run-in and introduction to the elderly man, I have realized that his pictures -- to him -- mean more than words.