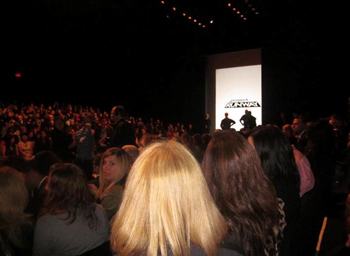 Every New York Fashion Week, Industry Publicity, the PR Firm I work for, splits into teams. Each team is in charge of a particular show. My boss and I were in charge of the logistics for The Project Runway Season 9 Finale Fashion Show. Since Industry has been producing Project for 7 years now, they have a clear logistics plan for the show. The issue every year is the execution.

The hardest part of any fashion show is dealing with the seating. Since Project Runway is a reality TV show, there are a multitude of companies that are involved with the show, and all must be seated. The theater was broken into eight sections of poster board, and I would play with the seating charts daily.

No one could touch them. If a nametag was out of order, it had to be remade and cut properly back into perfection. Seating would change every day depending on RSVPs and the ceaseless requests of those in power. God forbid you place Celebrity X by Celebrity Y. You didn’t know they had a fight last weekend? How dare you.

I had to wake up at 3 AM to get to the show. (Bear in mind that the show was held the morning after Fashion’s Night Out). As soon as I arrived, I met with my group of 20 interns to set out the instructions and review the run of show. Instructing interns is definitely a surreal experience after having been in their position just a year ago. I oversaw gift bag distribution, seating card placements, and every other task that needed to be complete before the first taping of the show.

Of course, 20 minutes before the final show, with VIP and celebrity guests swarming, my headset goes haywire. Who is Tod and why is he on my channel?! Maybe because my headset had been on the wrong channel!

I caught the mistake quick enough to learn that I was needed at check-in to accommodate guests faster since I was the master of the press and guest lists. I would ask for their name—“May I have your last name please?”—and it would quickly be followed by, “Oh I know you! How’s your wife doing? I got her message last night and I am sorry to hear she won’t be attending.” It was a routine, and people probably thought I was a creep for having memorized the entire 1,000-plus guest list. 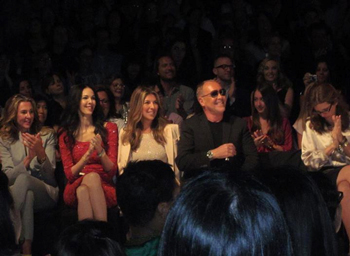 When I was finally amongst the crowd, a beautiful blonde woman made her way towards me, looking for assistance. I asked for her name and prepared to write her seating assignment on her seating card.

“May I have your last name please?”

My heart skipped a beat. I couldn’t even come up with a cute line to say, let alone utter that I knew who she was. Allison Brod, for those of you not reading up on the best fashion companies to work for, owns Allison Brod Public Relations Firm. She is at the top of her league. I’m hardly fazed by celebrities anymore, but this one took the cake. Everything went silent, including Tod, who was still humming through my headset.

Back in the theater, ten minutes before show time, there wasn’t a place I wasn’t. Here, there, everywhere, something had to be done. I just hope I wasn’t captured on camera during this moment. “Did you see Logan on TV? She was profusely sweating and kicking chairs.” Amid the chaos, I still managed to squeeze my girlfriends into fourth row seats across from Heidi and Michael Kors.

As the show began, all of the crew ran into darkness. I was smuggled backstage and watched a good portion of the show from the live feed.  It was then that the greatness of Lincoln Center and the awesome opportunity I was given really hit home.  Some would say I shed a tear for the beautiful clothing going down the runway. Truth is, I’m not one of those people that cry over a beautiful gown or perfectly-tapered pant. However, I did shed a tear for the moment I was in. A moment I will never forget: producing my first show during New York Fashion Week.