Today definitely was not an ordinary Friday! Surfing was on the agenda for this RMIT trip.

I was initially pretty calm but then everyone was asking if I was nervous. And of course then I became very nervous about drowning, sharks and embarrassing myself.

It was about a two hour drive to Angelsea Beach from Melbourne, which gave me plenty of time to relax before our adventurous day.

First, we went to a surf shop to meet the instructors and get our wet suits. Then we were off to the beach to catch some waves.

It was pretty weird how we had to change into our wet suits on the side of the road, but thank goodness it wasn’t a busy road. Now that we had on all of our gear we were one step closer into getting in the water.

We picked up our surfboards, which were surprisingly heavy and walked down the stairs to the beach. So now it was time to get ready to surf!

We started off by introducing ourselves to our three instructors, Lucas, Ry and Scott. Then it was on to the important stuff, like things we should avoid, such rip curls and rocks and what to do if there was an emergency. Now that we were aware of everything we should not do, we learned what we should do and how we should do it. 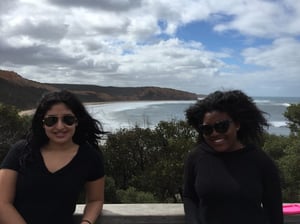 We then did some yoga stretches to loosen up our muscles and were taught how to paddle and jump into a quick stance. We did this about three times and then we were finally into the water.

The tide was surprisingly strong that day, and it all seemed pretty difficult, especially for beginners. The instructors were really helpful and motivating, and it was so refreshing how they remembered everyone’s name!

After about 30 minutes I was exhausted but I was determined to catch a wave! After trying forever I finally stood up…but only for like five seconds, but it still counts!

My hair was completely ruined, and I’m pretty sure that I drank half of the ocean but it was completely worth it! To say that I learned how to surf in Australia is something worth bragging about!