This was a busy weekend! Our host school took us on a trip to the Amalfi Coast.

Here we all loaded up on a bus early in the morning and went to our first stop, which was Mt. Vesuvius. Here the bus took us up a winding path so we could hike up to the summit of the volcano. 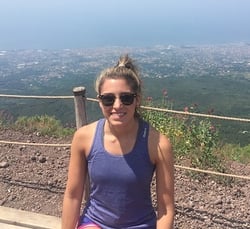 The hike took about two hours to do. We could have done it a lot quicker, but it was so hard for us to not stop and take pictures of the view!

From the volcano, you are able to overlook Naples, and the Mediterranean for miles. It was truly an amazing view. 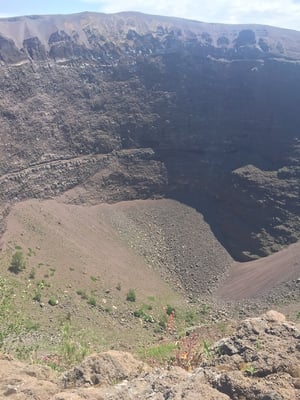 My favorite part was looking inside the volcano itself. Never in my life would I think that I would be able to look into a volcano. It was truly a unique, once in a life time experience that I am so happy I was able to see.

After the hike, our bus took us to our hotel right across from the beach, and we had dinner there. My roommates and I had no idea that they would be serving us so many courses.

For the first course they served us pasta, then it was followed by salad, and then finally veal, and a dessert cream puff. This was probably one of the best meals that I have ever had in a hotel. We could not get over how much food was served either!

After dinner, we went by the pool because the hotel gave us a little welcoming party which was nice. We decided to go head to bed early, because we had to be up early the next day to go to Naples.