This weekend will be my first official trip outside of Victoria, aka the state. We got pretty cheap tickets to Sydney for the weekend so we are off to explore that lovely city.

Our flight left at the crack of dawn on Friday morning. I got back from Uni on Thursday and did some homework and then the next thing I knew it was already time to head to the airport. It was about an hour flight, but it felt forever…probably because I hadn’t slept the night before.

After we landed, we were off to Nicole’s cousin’s house. Her cousin, which she had never met, was gracious enough to allow four strangers stay in her house. She lived in Tempe, which was about 20 minutes outside of the city, which was great. We settled in and then we were off to explore. 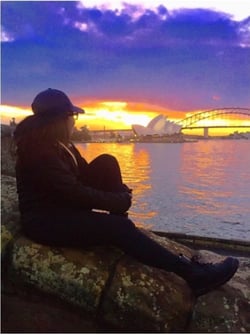 Nicole’s cousin was kind enough to give us a tour of pretty much every beach. We went to Botany Bay, Marboura Cogee, Bronte and Bondi beach. It was absolutely breathtaking. We even saw a dolphin at Marboura. We definitely would not have been able to see all of those beaches without having a “tour guide”, which was completely free! I was super so excited to go to Bondi beach and take a picture with the famous lifeguards from the TV show.

After all of that, we went to the Botanical Gardens to see the Opera House at sunset, which was absolutely magnificent. I of course had a photo-shoot there.

By now it was about time for dinner, so we headed back to Carmenia’s house (Nicole’s cousin), to have dinner on the table waiting for us! It was soooo nice to have a home cooked meal! 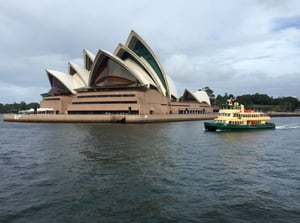 The next two days were jammed pack with exploring. We took a ferry to Manly Beach where we were able to get great views of the city from the water. We of course explored the city and walked around and we even went to Chinatown and saw and did tons more!

Although were there until Monday morning there was so much more I wanted to see. So I will definitely will be back to Sydney… especially since I prefer it to Melbourne, but don’t tell anyone!

Take a look at Nicole's blog post about our trip to Sydney.