Studying at RMIT, sometimes I feel extremely out of place when it comes to the Melbourne fashion scene.

I typically think it’s pretty cold outside and will have on sweater and a jacket and then people will be wearing shorts and sandals.

Yes, Melbourne typically has four seasons in a day so that may the reason. Overall, it’s just pretty difficult to decide what to wear on a daily basis. It might be pouring and then five minutes later it’s warm and sunny outside.

Besides the weather confusion, at Uni, students tend to dress up. Nobody shows up to class in their pajamas or even in sweatpants. I suppose that it’s not socially acceptable, which I guess is pretty similar at LIM. 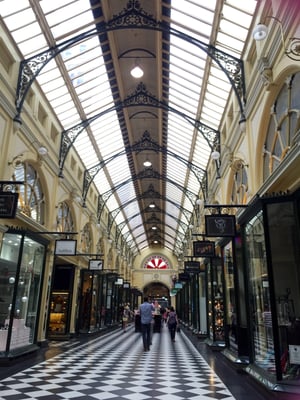 That being said, after being here for a while, of course, I wanted to enhance my wardrobe with some stylish Aussie clothes, but sadly I wasn’t so successful. Why? …Because CLOTHES ARE SO EXPENSIVE! The only stores that are relatively affordable are H&M and Uniqlo.

There are tons of trendy clothing stores, but the quality is not very good and the clothes are overpriced! In Fitzroy there are tons of great boutiques that have really cool unique brands, but I simply cannot afford them! There just aren’t any stores like Forever 21 where you don’t mind paying $10 or $20 for something that's trendy for only one season.

So, I tend to shop at “Op Shops,” along with the majority of other Uni students. “Op Shops” stand for Opportunity Shops, which are similar to thrift stores. They pretty much have everything there and are super cheap. One of my friends got a blazer for $4 the other day, and it looks really nice!

Don’t get me wrong. There are great stores, and tons of wonderful boutiques. But, personally, I would rather be able to afford food for the week!