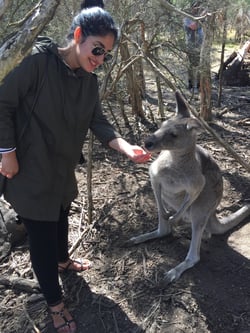 Today, we finally got to check off seeing kangaroos from our to-do list! Even better, we got to feed them!

We visited the Moonlit Sanctuary Wildlife Conservation Park and were able to get up close and personal with these beautiful creatures. As excited as we were to feed them, we were also very nervous to get close to them at first. We’ve all seen that YouTube video of a kangaroo boxing and kicking so we know how powerful they can be. However, these kangaroos were nice and gentle.

We had to walk into their habitat in the forest, hold our hands up with some food and hope that they wouldn't kick us. Luckily, none of us got kicked or hurt and it was a beautiful experience. There were some really large kangaroos and even some joeys and baby wallabies. 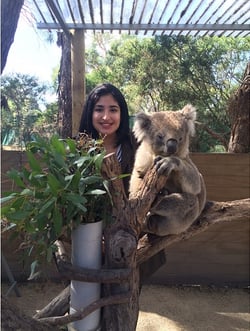 Australians have told us that kangaroos are as common as deer, and they have to be careful not to hit them while driving as they are known to run across the roads. They even have to shoo them away from their crops and farmland sometimes so that they don't mess them up. We don’t see any kangaroo’s running around where we live here in Melbourne, but that’s just because it’s very urban.

At the Moonlit Sanctuary we also saw some very adorable koala bears. Although we were allowed to touch their backs and feel their fur, we were not allowed to carry them. The woman who works at the sanctuary told us that it is a state law and that unfortunately, people are only allowed to carry koala’s in the state of Queensland. Although I wanted to give that cute koala a nice big hug, a picture was going to have to do for now.