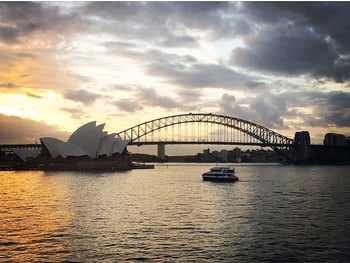 While Melbourne with its art and culture is one of the coolest cities I have ever been to, there is something that felt so…RIGHT about Sydney.

It’s CBD (Central Business District), reminded me so much of NYC, and I instantly fell in love with its modernity and scenic oceanside views.

It actually turns out that I have family living there that I have never met before. My dad has a cousin who moved to Sydney a long time ago and I was never able to meet her. However, I was lucky enough to be in contact with her right before I visited Sydney and she invited me into her home.

Her family showed me and my friends so many wonderful places like the Sydney Opera House, the Sydney Harbour Bridge, and so many beaches including Bondi, Manly, Bronte and more. There was so much to see in Sydney and I had so much fun exploring the city and getting to know family I had never met before. 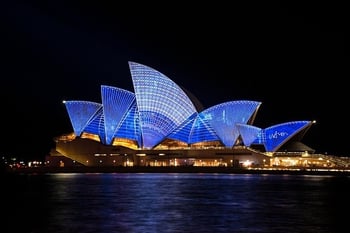 I think the thing that I was so shocked (and partially jealous) of, was that my cousin and her family had beautiful, thick Australian accents. It was amazing to hear about how they grew up feeding possums in Sydney parks (because they are as common as squirrels), watching footy games, and eating meat pies, and eventually as they got older finding their love for beer, travel, and adventure. They are total Aussie’s!

I feel like Sydney is definitely a place that I have to visit again sometime in the future. This city quickly made me feel at home and I feel so lucky to get to know my family members who were so welcoming and kind to me and my friends. I could definitely see why my dad’s cousin chose to live in Sydney. It is a place full of modern sights, and although it is a little more fast-paced than Melbourne, it is still a very relaxed and an enjoyable place to live.

Alyxis came along with me on the trip.
Check out her blog post on our weekend in Sydney.