9 Qs With Award Winner Russell Pagliughi from Marina B

This article is part of a series of interviews conducted by LIM students with winners of the Accessories Council's 2020 Design Excellence Awards (DEA). Students are enrolled in Fashion Merchandising Professor Andrea Kennedy's Honors Introduction to the Fashion Business class.

Recently, the Accessories Council announced the 2020 Design Excellence Award Winners, and the Fine Jewelry award was given to Marina B for the Trisolina Diamond 10 Row Bangle. We had the opportunity of interviewing Russell Pagliughi, the Global Director of Sales at Marina B Jewelry. Throughout the interview, we dove into everything from the inspiration behind the bangle’s design to Russell’s experience working at Marina B, as well as how the brand continues to break boundaries in the jewelry industry. 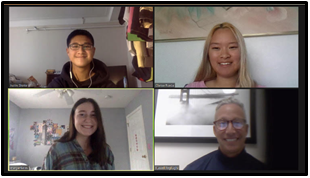 Marina B is a luxury jewelry brand that has been loved by women and Hollywood’s biggest female names from the 80s and still to this day. What is it like working for such an amazing brand?

Russell voiced his admiration working for a brand that “laid the foundation for women’s empowerment.” He shared how when Marina started out, she worked for her father at Bulgari, and she was constricted from designing jewelry because she was a woman. Once her father died, she inherited half the company, but still wasn’t allowed to design. Therefore, she sold her shares and created her own brand, Marina B. It was not commonplace in the ‘70s to see females designing and in the business world, but today she is considered one of the most important jewelry designers of the 20th century. Russell noted that newer brands don’t have that same impactful heritage.

How does the brand continue to break jewelry boundaries in terms of their designs?

It is the Creative Director Guy Bedarida who embraces the company’s roots while staying relevant in the 21st century. Bedarida never loses sight of the company’s origins and works to create the striking pieces Marina B is known for. The colorful and bold pieces from the ‘80s portrayed the message that women can be and are powerful. Bedarida continues communicating this mission with bold, yet refined, pieces.

Can you tell us a little about your background and how you became the Global Director of Sales at Marina B?

Russell started his career in the fragrance business and transitioned into jewelry. When he began his work at David Yurman as Head of Men’s and worked closely with designer, Evan Yurman. In six years, they quadrupled the men's business, despite the fact that men’s jewelry is often considered an afterthought. For the next six years, he worked at Swarovski on designer collaborations, working with big names such as Karl Lagerfeld. Finally, one day he happened to run into Creative Director Bedarida and soon found his place at Marina B.

What is your favorite part about working at Marina B?

Being the Global Director of Sales, Russell’s favorite part about his job is getting to work and developing close relationships with in-store staff. By being with them, he’s able to learn more about what Marina B’s customers want and wear. When working in the fashion industry, Russell said, “it’s key to get close with your staff and listen to them and the customers.

What was the inspiration for the Trisolina Diamond 10 Row Bangle’s wrap-around cuff design?

The inspiration behind the design of the Trisolina Diamond 10 Row Bangle’s wrap-around cuff traces back to Marina B’s heritage in the ‘70 when bracelets were large. According to Russel, this bracelet is a modern take on the Tubogas’s big, bold wrap cuffs that Marina B designed during that era. It was important to maintain the heritage of the design and the aesthetic that Marina B stands for when designing this piece.

What inspired the wrap-around cuff design as opposed to your other single bangles?

We learned from Russell Pagliughi that throughout his career, Guy Bedarida, the creative director at Marina B and the designer of the Trisolina Diamond 10 Row Bangle, always offers bracelets in varying lengths to satisfy different types of customers. There may be customers that are more “conservative” and go for the 1 or 3 Row Bangle, but there are customers that are more fashion-forward and may gravitate towards the 10 Row Bangle. 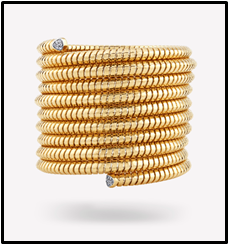 Marina B has always been a global brand, and Asia is its fastest growing market. In fact, they were the first Western company to open boutiques in both Japan and New York City.

Are the majority of your customers international, or mostly in the US? And other than your web sales, do you also wholesale to jewelry shops or specialty department stores.

Loyal customers around the world are a valuable component to Marina B’s global success. The U.S. is the company’s number one market, Asia is number two, with Europe third. Wholesale is also one part of the company with the line sold at stores such as Bloomingdales, Neiman Marcus, and Saks. The company is currently exploring wholesale expansion in Asia.

You have immense experience in the marketing and jewelry world. Do you have any advice for us students about getting into the industry?

Russel really emphasized the importance of trying everything in internships and jobs.  He advised, “What you think you like might not be what you think it is.” Even if you don’t stay in one area, you gain experience that is just as important. Russel concluded with this advice, “Don’t wear blinders, broaden your scope and never ever settle.”

We thank Russell Pagliugh for sharing Marina B’s rich heritage, as well as his expertise. We learned so much and promise to never wear blinders!