A Trip to The Whitney with Visual Studies Faculty

Last month, the LIM College Transfer Student Organization held an event at the Whitney Museum to connect transfer students with faculty from the Visual Studies department while touring exhibits. Students had the opportunity to network with those in Visual Studies, and the event concluded with a complimentary dinner at Untitled, The Whitney’s restaurant, to discuss our experience further. As a transfer student, this event offered me a lot of insights and allowed me to share opinions on art exhibitions with peers and professors. 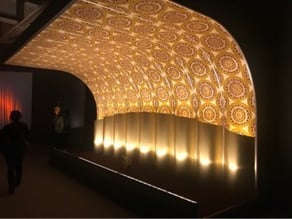 On the eighth floor, jazz artist Jason Moran’s mixed-media displays, integrating music objects and sounds, are abundant. Almost like the experience of stepping into a movie theater, large screens played video and musical sounds reverberated across the room. Staged replicas of famous jazz venues with pianos, chairs, drum sets, and other instruments gave viewers the effect of being in an audience awaiting a band’s gig onstage.

A grandiose golden curved wall, based on Harlem’s Savoy Ballroom where jazz and swing were most notable, dominated the room. Moran gives material presence to sound by taping vintage piano roll paper to a piano’s keyboard and covering his fingers with charcoal. The movements from playing the piano and creating music are captured on paper and framed.

The seventh floor consisted of The Whitney’s Collection: Selections from 1900 to 1965. This exhibition had a collection of artwork from the original founding collection when the Whitney was established. The individual contributions of several artists, such as Georgia O’Keeffe and Jay DeFeo, were chosen for their ability to capture major historical movement in the art world and reflect a dynamic culture throughout American art. 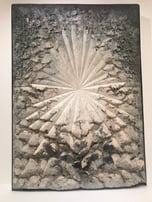 One of the most captivating pieces from this collection was Jay DeFeo’s  The Rose. DeFeo worked on it for almost eight years by layering thick paint to create a 3D effect that almost looks like a sculpture. By building multiple layers of paint and then carving and repainting, she was able to produce a center that comes alive off the canvas. DeFeo continuously added, extended, lengthened, and widened this piece over the years—once completed, it weighed 1,500 pounds and needed to be forklifted out of her studio.

Not only did this event provide an opportunity to look at extraordinary art, it also gave me a chance to discuss my ideas and thoughts with peers interested in visual arts as well as network with LIM’s Visual Studies faculty. This combination of an artistic and visual environment, along with thoughtful discussions with faculty and peers in the visual field, helped me gain a better understanding and knowledge of visual elements.

The event capped off with a dinner at Untitled, The Whitney’s restaurant, where students and staff discussed our favorite exhibits, paintings, artists, and posed questions for each other. This sharing of ideas was most enjoyable, as we all were able to learn about one another’s differences or similarities in perspective.