If you were in any of our visual studios during the Spring semester, or attended LIM’s Fashion Show, you’d know that the giant Blow Pop props you saw were my little brainchild of a project. Once I mastered the process of creating them in a way to make them as realistic as possible, I realized I wanted to carry the project on into inspiration for a final class project.

In Professor King’s Visual Merchandising: History, Theory, Practice course you are presented with a multitude of challenges every single time you step foot into the classroom. While it was a bit stressful at first, it was easily one of the most influential and effective courses I’ve taken at LIM College. Being presented with a challenge, time constraints, specific requirements and limited resources you are truly forced to find a way to be both innovative and inventive all while making it work with what you have on hand. 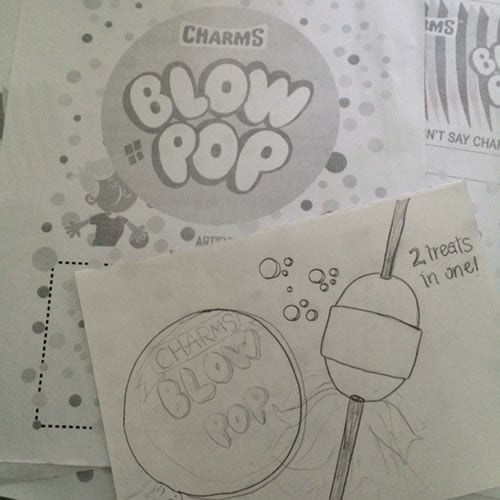 Our final project was to create a POP (Point of Purchase) display. I chose Blow Pop and decided to implement my recent itch for graphic design into the design. I updated the entire packaging of a traditional Blow Pop box by drawing it out in Illustrator and created a sticker film, applying dimensions to transfer on to the actual box fixture that I created out of foam core. The box mimicked the large cardboard ones filled with 50+ lollipops that you would find in Costco or a convenience store on display. 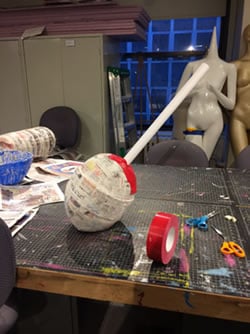 To really tie it all together, I made another giant Blow Pop with a wrapper that tied into my new color scheme and flavor launch for Spring. The final element, which I enjoyed most, was ripping apart a toy car to create a way for the giant Blow Pop to rotate to add an element of interaction into the POP. The bottom sleeve was filled with lollipops for customers to try and provided a way to house the product, which is the most important part of a fully effective POP.

To see this POP in person take a walk through our Fifth Avenue location and check out the alcove by the computer lab where our class projects are housed.