Last week, I decided to go to the SoHo location to try their famous milkshakes. After waiting outside in line for about an hour, the security guard at the door to the restaurant came back to where I was standing in line and 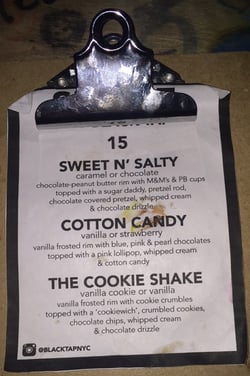 told us it was going to be at least a three hour wait due to the lack of seating inside, but that the Meatpacking location would be opening at 5pm and there the wait would only be about an hour.

I decided to head to the location in the Meatpacking District and as promised, was seated inside in a little less than an hour. Before coming to Black Tap, I did my fair share of social media research to find out what flavors of milkshakes there are, and how much they cost.

I determined that the flavors consist of Birthday Cake, Sweet N’ Salty, The Cookie Shake, and Cotton Candy. However, Birthday Cake was not on the menu when I visited so that was quite disappointing. 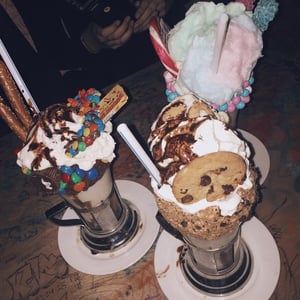 The shakes were priced at $15 which is pretty expensive for a milkshake, however it was 100% worth it.

The famous milkshakes not only lived up to the hype, they made standing in the freezing cold for more than two hours worth it. In conclusion, when going to Black Tap, make sure that your whole evening is cleared for the long wait times, and bundle up!