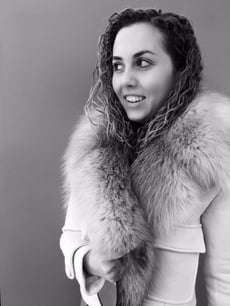 This article is part of a series of interviews conducted by LIM students with members of the Council of Fashion Designers of America (CFDA). Students are enrolled in Fashion Merchandising Professor Andrea Kennedy's Introduction to the Fashion Business class.

In November, we had the privilege of interviewing the Director of Member Services at the CFDA, Sacha Brown. We met with her for close to an hour, and she answered questions about her career, the industry, and where fashion is headed. Ms. Brown’s extensive industry experience and charming personality made this interview a wonderful opportunity for us both.

A native Canadian, Brown graduated from Queen’s University in Kingston, Ontario with a degree in theater and health. When we asked what made her switch over to fashion, she responded with a humble laugh and simply said, “Yeah, I get asked that a lot.” She added that she’s loved fashion since she was a young girl and that it’s in her blood. Majoring in theater only deepened that love, as costumes allowed her to transform into totally different characters. From there, Brown decided she wanted to study fashion marketing in the fashion capital: New York City.

Having worked her way up the ranks at the CFDA, we asked Brown what a typical day is like for her as Director of Member Services. She made it evident that each day is a new adventure, so it’s not easy to sum up one day in her life. Like a school that is required to create a syllabus to outline a course, Brown develops a program outlining what is happening in the industry at the moment. On a daily basis, she reaches out to retailers, editors, members, and buyers in order to forecast what’s to come.

When we asked what she loves most about being the Director of Member Services, Brown said she loves the feeling of always being on her toes. She claims every month brings something entirely new with an exciting event to work towards and new people to connect with: “I’m never limited or tied down to one thing.”

With the CFDA, Brown has had the opportunity to travel to industry hotspots, such as China and London, learning about global business structures and about unique manufacturing processes in various cities and countries. In addition, she collaborates with the British Fashion Council and meets emerging designers.

When asked who are the favorite brands she’s gotten to work with, Brown said that Proenza Schouler was one of the sole reasons she decided to move to New York. She was inspired that designers as young as twenty were able to “take over the world.” Pyer Moss, which was recently a CFDA/Vogue Fashion Fund award finalist, is also one of Brown’s favorites. Brown believes that Pyer Moss designer, Kerby Jean-Raymond, is part of the future of fashion, since his designs are influenced by substantive topics like current culture and politics.

Continuing on the theme of growth and change in the fashion industry, Brown recalled the state of the industry ten years ago when, “A designer’s biggest challenge was getting into retail locations like Saks Fifth Avenue and Barneys,” and that this was the factor that would make or break their career. However, the industry has since made a 180-degree shift: designers are less focused on getting into a large department store and more focused on keeping control of their brand. Brown firmly believes that the industry is currently oversaturated because there are so many similar pieces out there; the question of which brands will prevail is a matter of who is able to form a connection with consumers. In today’s society, the culture around us and the betterment of the environment is greatly influential, so the brands that focus on sustainability will be the ones that make it.

Our biggest takeaway from the interview was Brown’s advice for those in the fashion industry. She stated, “Find a mentor and be a sponge.” Even after her many years of experience, Brown still believes she has much to learn. To gain more knowledge, she feels it’s important to find someone who can challenge and teach you. One of Brown’s goals is to have lunch with an “industry veteran” once a week to hear what they have to say and receive advice. In fact, one of Brown's first jobs came out of her conversation with a college public relations professor, post-graduation.

We asked Brown where she sees herself ten years from now. She laughed, “I hope I have a house with a yard.” But in regards to the fashion industry, she deems it important to be equipped with diverse experiences. She added that the roles she’s had so far—first in education, then with the Vogue Fashion Fund, now as the CFDA’s Director of Member Services—have each granted her amazing opportunities.