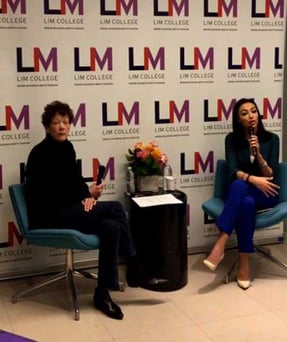 A quest for career guidance, and an examination of the female perspective in media, sparked entrepreneurial inspiration for Iman Oubou. “I felt all I was reading in the media were related to lifestyle and fashion and beauty, rather than actual stories that showed women challenging the status quo,” she told the LIM College community at the fourth annual Women’s History Month breakfast in March.

Ms. Oubou believes she has found her purpose to amplify women’s voices in the media since launching SWAAY in 2016. This digital media platform explores women’s challenges, potentials, and successes in all types of careers.

Oubou’s goal to increase women’s representation in media was solidified after winning the Miss New York beauty pageant in 2015; she wondered how to best leverage her public platform, but the vision needed seed money. When she began visiting investors to raise funds for her venture, some of those experiences were eye-opening.

Oubou said she encountered uncomfortable situations in her meetings with male investors. Some greeted her with snide remarks on her clothing, saying she was too pretty to be CEO, and suggesting she would fare better by endorsing beauty products instead. These comments on her appearance rather than her business made her feel powerless and shocked.

“In women’s lives, there’s always the narrative of ‘You’re too X to be Y,’ and a lot of women founders end up having not as many chances to grow multimillion-dollar businesses because they’re discouraged from the beginning due to their gender, looks, or age,” Oubou said. “There’s a lot of barriers for businesswomen that men don’t have to go through.”

Oubou noted that 70% of bylines are written by men, even on female-focused topics. Through SWAAY, she and her team try to expand perspectives and conversations by featuring women writers who go beyond the lifestyle topics of fashion, beauty, and relationships, having deeper discussions on career, policy, and health.

Despite obstacles, Oubou said her biggest motivator to persevere has been her belief that women need a publication like SWAAY. She seeks to provide advice for women who may feel lost in their career or deliver just a boost of inspiration via stories of empowerment.

At the event, LIM College President Elizabeth S. Marcuse concurred that society needs to do more in all aspects of women’s careers, so they can aspire to leadership positions. “As President of a college whose on-campus student body is almost 90% female, I’m acutely aware of the need to promote women’s advancement in both private and public spheres,” Marcuse said.