Our Interview with Adam Roth: VP of Strategic Partnerships for the CFDA 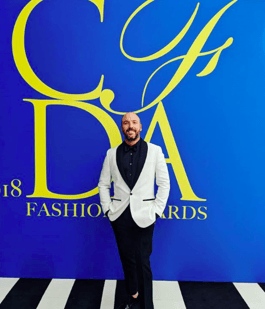 This article is part of a series of interviews conducted by LIM students with members of the Council of Fashion Designers of America (CFDA). Students are enrolled in Fashion Merchandising Professor Andrea Kennedy's Introduction to the Fashion Business class.

Adam Roth is the CFDA's Vice President of Strategic Partnerships, connecting with outside companies to create and solidify productive relationships for the CFDA. We conversed about his career path, as well as the fashion industry as a whole and the future he sees lying ahead.

We asked Mr. Roth when he realized he wanted to work in fashion, and he responded that he always had an interest in the industry. He recently came across a questionnaire he filled out as a child regarding career aspirations, in which he actually wrote that he wanted to be an executive in the fashion industry!

Roth began his career in publishing, and from there was introduced to home design. Moving around in the publishing world, he eventually worked for Glamour Magazine, where he says he learned the “professional language” of networking.

Joining the CFDA resulted from a collaboration between his previous organization, American Express Publishing, and the CFDA. After working on a long—ultimately successful—project together, the CFDA reached out to Roth and offered him his current position as Vice President of Strategic Partnerships.

Today, Roth finds his work at the CFDA very interesting because the organization follows the retail industry very closely and works with all types of companies. Looking into the future, Roth mentioned that the CFDA is now finding new opportunities in the entertainment industry. They are working alongside Hollywood more and more, leading to many positive collaborations. For example, the CFDA recently helped with the 30th anniversary of Phantom of the Opera, where thirty designers made thirty masks to sell at auction, the profits for which were donated to charities fighting AIDS.

When asked what he finds to be the most challenging part of his job, Roth spoke about the need to regularly educate corporate executives about the full purpose of the CFDA. If someone resigns from a company with whom the CFDA is collaborating, sometimes that partnership will need to be reestablished.

The most rewarding part of Roth’s work with the CFDA is helping hundreds of design students find jobs and build their networks. Not only does Roth bring in fashion employers through his partnering efforts, he also finds HR professionals from other fields, such as architecture and the mechanical industry.

When asked where he sees the fashion industry heading, Roth responded that the recent years of retail have been crazy; however, there is a positive shift to catering to customers’ wants and needs. Roth mentioned that retailers will continue becoming less and less traditional, making the consumer feel genuinely included in the experience of their purchase.