Interview with Steven Kolb, President & CEO of the CFDA 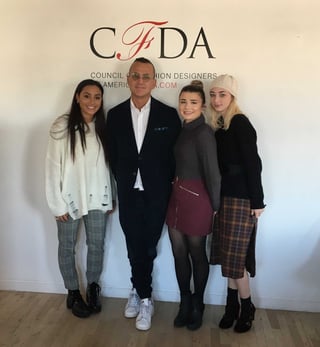 This article is part of a series of interviews conducted by LIM College students with members of the Council of Fashion Designers of America (CFDA). Students are enrolled in Fashion Merchandising Professor Andrea Kennedy's Introduction to the Fashion Business class.

When we asked CFDA President & CEO Steven Kolb what his advice would be to someone starting out in the fashion industry, his response was, “You have to love fashion if you want to work in fashion.”

As part of our Introduction to the Fashion Business class, a small group of us went to the CFDA offices in downtown Manhattan to interview Mr. Kolb, who wore a velvet navy suit with a light-blue handkerchief and gold-rimmed spectacles.

Kolb never previously imagined having a job in the fashion industry and was originally more interested in nonprofit work. He began working at the Design Industries Foundation Fighting AIDS (DIFFA), but then an opportunity arose to start a career at the CFDA. Kolb explained to us that, at the heart of it all, his passion lies with helping people, and he is still able to do this because of all the nonprofit opportunities at the CFDA, such as their fundraising for HIV/AIDS and breast cancer. He also enjoys helping young designers fulfill their dreams.

A typical workday for Kolb isn't so “typical.” He’s worked in the fashion industry for twelve years and every day at the CFDA is different. He regularly speaks with designers, such as Diane von Furstenberg, and reviews applications for the CFDA/Vogue Fashion Fund. Looking at the challenges people go through in the fashion industry is another big part of Kolb’s job because he is working towards creating a more inclusive industry.

Kolb explained how fashion is a powerful force in our economy, providing jobs and creating a better community. This has been his focus for the Fashion Manufacturing Initiative, which awards grants to New York City factories to help them acquire better technology and tools for production. Since its inception, this initiative has donated approximately $2.5 million to local factories. Local production is important for designers because there is better quality control, opportunity for shorter production runs, and the ability to get manufactured products in stores faster; Kolb believes the latter is a particularly important asset to many designers.

When asked where Kolb sees the fashion industry heading, he explained that in order to keep up with increasing consumer demand, designers are beginning to present their fashion shows earlier and have products available for purchase immediately after the show instead of having to wait until next season. This allows designers to deliver collections earlier and sell them full-price for longer.

Kolb believes there will continue to be a blur of gender within collections of menswear and womenswear. He discussed how he works with innovative designers who create gender-fluid lines, as well as designers who are very diverse. He hopes fashion can move more toward being gender-neutral and inclusive so that everyone has a chance to express their style.  He also emphasized that he does not see streetwear fashion going away and that it too will continue to be more inclusive.

Kolb described how the hardest part of his job is getting people to understand and think positively about the changes occurring in the industry. A lot of people are not ready to accept change, but he feels that in order to be a part of the industry, you have to understand that it’s not all about “glitz and the glam.” It is mostly about commitment and patience. He said, “I see change as a new opportunity,” and he hopes others share his perspective.

When asked about his favorite designer he ever met with, Kolb shined. Since he is more on the business side of fashion, he’s not very involved on the creative end. Kolb says meeting designers helps him use creative skills, which isn't something he does often. He was most excited when he met Oleg Cassini, who dressed some of Kolb’s idols, such as Jackie Kennedy Onassis.

We were intrigued to know what Kolb’s advice would be to someone who is interested in being part of the fashion industry. He revealed how grateful he was that the industry was patient with him when he started out, mainly because people observed his work ethic. Kolb advised us, “Find someone who can act as your mentor, do not be afraid to ask them questions, build trust with them, and do not wait for them to ask you to do something. Give as much as you have, make yourself stand out, take initiative, and own your ideas.”