Juneteenth - The History and Its Importance

Juneteenth, also known as "Freedom Day,” is a holiday celebrated on June 19thin over 200 cities in the US. However, it’s not always taught in schools or celebrated as a federal holiday (yet), so there are a lot of citizens that do not know about its significance and its importance in American history.

The holiday symbolizes the end of slavery and represents the freedom of African-Americans like July 4th represents Americans’ freedom from the British. But of course, America’s Independence Day did not represent the independence of African-Americans. In Juneteenth- A Celebration of Freedom (1995), author Charles A. Taylor says, “Juneteenth serves as a historical milestone reminding Americans of the triumph of the human spirit over the cruelty of slavery. It honors those African-American ancestors who survived the inhumane institution of bondage. It demonstrates pride in the marvelous legacy of endurance and perseverance they left us.”

The Emancipation Proclamation of September 2nd, 1862, issued by President Lincoln, stated that if the Confederacy did not cease their attacks by January 1st, 1863, he would induce the freedom of all slaves. Even though he made this proclamation, many Southern states ignored it, and over 800,000 slaves were not given their freedom. It wasn’t until the year 1865, after more battles were fought and the 13th amendment of the US Constitution would make it illegal to own slaves, that all African-Americans were freed from slavery.

Juneteenth is considered a state holiday in 46 out of the 50 states of the US. It is not recognized as a federal holiday, meaning people cannot take off from work or school. In hopes for more recognition of the holiday, and to have all Americans celebrate it, social media posts have been circulating for weeks encouraging everyone to purchase goods and services from African- American-run businesses on June 19th. This shows support for the community and brings awareness to the holiday. As a part of the Black Lives Matter movement, there has even been word of people affirming their commitment to doing this during the week leading up to July 4th, to further bring awareness to the holiday in hopes that it will be recognized on a federal level.

I believe this holiday is just as important as July 4th or any other federal holiday. It is important to educate ourselves on the history of slavery and to celebrate its repeal.

If you want to learn more about this history behind Juneteenth and how to celebrate or show support, check out the links below. 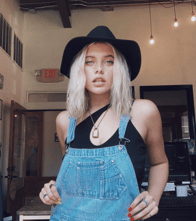 Kally Compton is a Freshman at LIM. In addition to being on the President's List, she works on The Lexington Line, as culture editor and assistant stylist. She is studying Fashion Media and minoring in Society & Culture. She is also a content writer for the LIM News & Events page.