Mara Hoffman: Her Journey Toward A Sustainable Brand 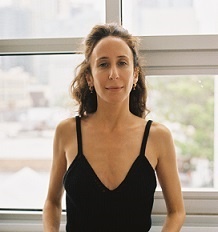 From the very young age of nine, Mara Hoffman knew she wanted to be a maker. Her mother was her biggest supporter; she wore Mara’s skirt, despite its tightness and that it had tons of buttons glued all over, but her mother didn’t mind. When Mara was growing up, her mother would work hard to buy one specific clothing item and would cherish it for a very long time. “Today,” Mara said, “our relationship with clothing changed because instead of cherishing each article of clothing we are focusing on new lines and want new wardrobes every season.”

When Mara Hoffman studied at Parsons, she lived off vintage, handmade clothing. She would stay up all night deconstructing and reconstructing her clothing to create her outfit for the following day. She graduated later than all her friends who were already working in the styling industry. Those friends would ask her to create pieces for the celebrities they were styling. Mara would hand make every single piece for them, all one-of-a-kinds. She put complete and full attention into every single detail of the garments. After they were worn, she would bring them to consignment stores, trying to get retailers to buy and resell them. One time at a consignment store, Mara bumped into Patricia Field, the stylist for Sex and the City. Patricia bought one of Mara’s pieces for $200 and then sent her buyers to acquire more of Mara’s designs.

Patricia Field gave Mara the confidence she needed to go out of her comfort zone and show her work to buyers from different stores. When a buyer would tell her no, she didn’t get upset, she simply took it as constructive criticism and would come back later with improved products. Soon, Mara began getting a lot of orders. Since all of her pieces are handmade, it became physically impossible to keep up and get it all done herself. Mara figured that she can have yardage printed with her designs and this way some of the work will be taken off her hands. Her company began to grow and take off.

After Mara’s son was born she wanted a change for her growing company. She did not want to contribute to the negative environmental impacts of the fashion industry. She went to her production manager to plan a change toward sustainability. Together they started to reevaluate their regular processes, what their collection was made of, and where there was room for change. They chose to start with changing their fabric choices. Mara didn’t want her customers to realize that a change occurred, she wanted them to still be able to recognize that each style is a Mara Hoffman original. The company changed a larger percentage of their fibers to sustainable choices. This process was more difficult on her company because they did not have outside investors, but she didn’t care, it was too important to ignore. Today Mara Hoffman uses hemp, organic cotton and Refibra as the main textiles and creates her prints digitally without water. Mara and her team put tons of time into researching sustainability and how they can create their prints and clothing from these new fabrics.

From hearing Mara speak I learned that hard work pays off. She never gave up on her goals and dreams despite her lack of money to support herself. I also learned that it is important to stand up for what you believe in. If you want a change for sustainability and truly believe that it’s the right thing to do then don’t listen to production buyers or anyone else that don’t agree with you and just go head first into it, because the outcome will be great. I think that the fashion industry can benefit from Mara Hoffman’s ways of sustainability because they can see a very successful designer standing up for what she believes in and making a change disregarding what everyone might think. This may give other young designers the confidence to change or start their business in a place of responsibility and to inspire the people around you as well. Mara truly inspired many of the young business people sitting in that room to not only speak up and fight for what they believe, but also to know the importance and understand the ways of sustainable production today.