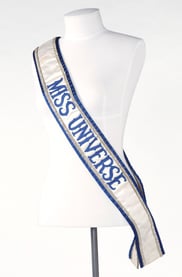 On December 17, Miss Universe 2018 aired, surprising its audience with a new commitment to inclusion and diversity. This was the first year, for example, that a transgender contestant, Miss Spain, Ángela Ponce, participated in the competition. The runway was populated by short and natural hair, and even the luxurious swimwear and evening gowns were less constrictive and strayed from gender norms. To top it all off, the selection committee was entirely female, combating claims of inherent misogyny in “beauty” pageants. I’m glad to see the organization as a whole is taking steps to change for the better, but a couple things transpired during the 2018 competition that bothered me.

Steve Harvey, comedian and host, was dragged after infamously crowning the incorrect contestant in a previous year's competition. It was important for Harvey to be on his best behavior to make up for this incident. After a couple bland jokes about spicy Thai food—the competition was held in northern Bangkok—Harvey gaffed yet again as he introduced the top 20 contestants: Marta Stępień, Miss Canada, is a student and researcher of biomedical engineering. When she stated her occupation as an engineer/model, Harvey advised: “Engineering isn’t fun. Just go with the modeling. You get to travel the world and wear nice clothes.”

If only modeling was that easy (or any job in the fashion industry for that matter). Comments like these undermine the important and exhausting work models put into being the face of an industry. Perhaps Harvey can focus on the fun in life when he receives a paycheck no matter how many times he fails, but for the women competing—who have built libraries, fought tuberculosis, and escaped child marriages—the comment seemed tone-deaf.

Also ill advised was an Instagram Live Feed of Miss U.S.A., Sarah Rose Summers, mocking the English of her peers. She called Miss Vietnam, H'Hen Niê, “cute” for “trying so hard” to understand her English. In another scene, “poor [Miss] Cambodia,” Rern Sinat, was the target of Summers’ condescension for being unable to communicate with her fellow contestants. After being called out by viewers, Summers explained her perceived bigotry was simply misunderstood concern.

Other fashion brands and famous figures have tried using this excuse to downplay their own “misunderstandings” in 2018. Gucci’s Autumn/Winter collection sent models down the runway wearing Sikh turbans, although no Sikh models were present. Dolce and Gabbana’s D&G Loves China show was cancelled in Shanghai after a promotional video of a Chinese woman clumsily eating Italian food with chopsticks sparked fury online. Chief Marketing Officer of Victoria’s Secret, Ed Razek, told Vogue that plus-sized and transgender models wouldn’t be featured on the runway because they are not anyone’s fantasy.

Well, when Ángela Ponce walked the Miss Universe stage, this was a fantasy realized for many women who've had a very hard time gaining acceptance in the modeling and beauty industries.

The fashion industry is driven in large part by women of color, plus-sized women, transgender women, and engineers/models. Miss Universe 2018 deserves credit for putting these faces in the spotlight; but the competition still has a long way to go and an obligation to make up for its mistakes.

Still, even with these unfortunate moments, Miss Universe 2018 felt like a welcome break. (Though, I can’t say I’m excited to see Harvey back in 2019.)

About the Author
Ariel Moise Kleinman is a transfer student who is currently in her junior year at LIM College. She is pursuing her Bachelor of Business Administration in Fashion Merchandising.