The National Retail Federation is a nonprofit foundation at LIM College that allows students to widen their network and be mentored by industry professionals. They hold weekly sessions to give students guidance and insight on how to succeed in this industry. Every week, there are different guests from many kinds of retail sectors. Recently, three amazing entrepreneurs gave their best advice on how to start your business and how to maintain your business. The sesion’s theme was Black-owned businesses, and the industry participants were: Amanda Johnson, Co-founder and COO of Mented cosmetics; Mikaila Ulmer, founder and CEO of Me and the Bees; and Mahisha Dellinger, founder and CEO of Curls.

Amanda hosted the session while Mehisha and Mikaila answered questions. Mikaila’s career started with a simple lemonade stand in her front yard. She says she has always been determined to be an entrepreneur, ever since she was a little girl. Mikaila’s late grandma had a lemonade recipe that replaced sugar with honey, so she decided to use her recipe and give a percentage of her sales to save the bees. One of the most impressive parts of her story is she’s only 15 years old, and she started her lemonade stand when she was just 5.

Some advice that Mikaila gave is to focus on building your local network before expanding to other areas. This will help you learn and have some stability before business gets too big too quick. A big tip she shared was to check intellectual property. Her original company name was very similar to another company’s, and she was forced to change it or pay a lot to be able to use it. Through the years, Mikaila said one of the biggest challenges in her business is to secure shelf space in stores. The beverage industry is very competitive, so I can definitely see how this could be an early challenge.

She was recently featured on Shark Tank and received a lot of funding for the business. Mikaila says thanks to that, she’s been able to expand and grow. When Amada asked if she had any last minute advice, Mikaila said, “be resourceful with what you have, especially when you are starting off.” When there is little funding, you have to think outside the box and make the best of what you have. 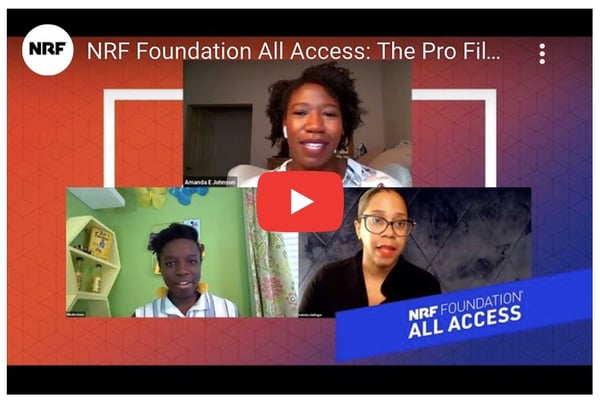 When Mahisha experienced corporate racism for the first time, she decided she needed a change and became an entrepreneur. At the time, she had a young daughter that she wanted to care for with natural hair products, but there was nothing in the market that satisfied her needs, so she decided to start her own line. This is when she became founder and CEO of Curls. Now you can find Curl products at any big retailer, but it took a long time to get to that point.

Mahisha worked two jobs for three years in order to provide for her family but grow her business at the same time. Before leaving a job to start a company, she advised, “never leave your job until you have enough stable income and sales.” Make sure there is a demand and opportunity for your product. Track record and growth to see if the profit is substantial enough. She suspected there was a need for her product because her family consists of many curly haired people who were not satisfied by what was on the market. Mahisha mentioned that her biggest challenge was access to capital. Women receive less than 2% of all venture capital money, and black women receive 0.06% of it. Funding her business was a struggle but she never let that affect her end goal.

At one point, Curls was doing so well that retailers kept asking for more products, even though there weren’t more. The company started putting out too many products without complete validation, which made Mahisha realize she  couldn’t put anything out there that she didn’t feel 100% strongly about. In response, she stopped putting out products she thought there wasn’t demand for.

Ultimately, Mahisha became so successful in her business, she landed a show on Oprah's channel, OWN, called “Mind your own Business, Mahisha.” On this show, she mentored women of color who were starting their own businesses. She said while she filmed this show, she realized that to be an entrepreneur you have to have grit, which is something that cannot be taught.

Hearing these young entrepreneurs’ advice was very informational. I liked that they wanted listeners to learn from their mistakes. You can watch all NRF All Access on demands on https://nrffoundation.org/allaccess/events/on-demand for a weekly upload.