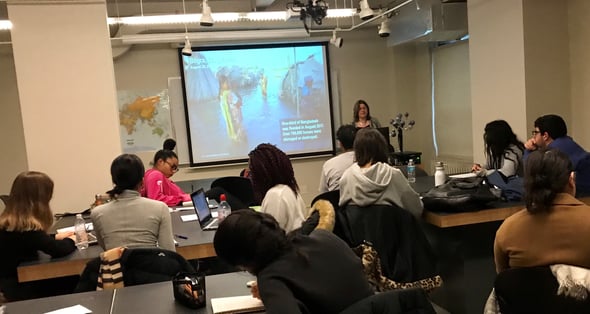 Extreme weather catastrophes around the world are happening so often. Record-breaking hot days, typhoons and hurricanes, floods and droughts, and fires are getting the attention of the world. These extreme conditions are partly due to humans polluting the world with greenhouse gases that heat up the Earth’s atmosphere. Climate reality leader Patty Buchanan recently came to LIM College to talk about these issues in the Sustainability and the Future of Fashion course.

“Climate change is the unifying destruction of the world,” said Patty Buchanan, in her presentation titled “Climate Reality and Migration.” She showed the first picture ever taken of Earth in 1972 and described the Earth as balanced and borderless. Therefore, she said we need to work together, the world as one nation, to reduce and resolve the effects of climate change. Buchanan shared the fact that every 24 hours, humans spew 110 million tons of man-made global warming pollution into the thin shell of the atmosphere, creating a heavy blanket of heat and raising the temperature of the Earth.

Rising temperatures are having a drastic effect on the Earth’s population. The year 2018 was the hottest to date, with 117 locations around the world setting all-time heat records. Extreme weather catastrophes are also the cause of mass migration. Around 60 percent of Syria’s fertile land is being turned into deserts and 15 million people in the Philippines have been displaced by typhoons and storms. By 2050, there will be 140-250 million climate migrants in developing nations in Asia and Africa. As the earth gets warmer, sea levels are rising, due to the arctic ice melting at an incredibly fast rate.

This also has an impact on the fashion industry. For example, Bangladesh is the third-highest-producing apparel manufacturing country in the world, but it is currently suffering the fastest sea level rise in the world, which will likely displace 30-50 million of Bangladesh’s population in the future. Apparel factories in Bangladesh will cease to exist if our sea levels continue to rise at the current rate. This could have an immense impact on many global brands like H&M and Zara, whose clothes are mainly produced in Bangladesh. In addition, brands that manufacture offshore in developing countries may be affected with the increase in climate migrants.