Predictions for the Fashion Industry

During this time, there is so much uncertainty about what will happen. There are many elements of fashion that will have to change for the industry to open again. There also have been many game-changers, with large companies closing half their stores or filing for bankruptcy. However, the pandemic has actually created the perfect opportunity for reinvention and possibly opening consumers’ minds to trying new things.

These are some predictions for what the fashion industry will be like post-quarantine, according to BoF, Vogue, and WindowsWear. This is what experts are saying about this topic:

As stores open, there will be noticeably different requirements of shoppers and sales associates. Examples of the possible changes the US may follow can be seen in the trends going on in Milan as it reopens. One is that there will only be a few people allowed in stores at once. Currently, Gucci is only letting 27 people in at a time, and there is a thirty-minute wait to enter the store. Despite stores opening, social distancing is still a requirement.

In beauty stores, the associates or makeup artists are not allowed to apply makeup on customers. This could greatly inhibit sales at Sephora, which depends on this kind of service for business.

All clothes that are tried on must be steamed and then quarantined for twenty-four hours, to ensure that there is no risk of transmissions of the Coronavirus. Stores are also required to disinfect all their dressing rooms after use. While all these promote the safety of the customers, there are a few steps retailers must take behind the scenes. They may be forced to drop brands that are not selling as well as others or change their entire collection of brands. They will also have to learn how to engage customers that are used to constant sales. Though the key factor that will lead to the success or failure of retail companies is the level of openness about unsold inventory, canceled orders, budgeting, production character, and their business plans.

In the fashion industry, a major job is being a buyer for different companies. These jobs involve mainly face-to-face meetings where buyers can view and feel the products. These jobs often involve traveling to showrooms and tradeshows. Most of these activities will be highly limited post-quarantine, but people are starting to prepare for this reality.

Greater use of a digital platforms like Joor, Ordre, Alkeon, and Nuorder is predicted. Designers are also creating digital walkthroughs of their collections. The emergence and use of these digital tools is not new, and the pandemic may have just sped up the trend to go fully digital. In 2013, Diane Von Furstenberg used Google glasses to record the models in her garments. Then in 2015, Christopher Raeburn created a 3D film of his spring-summer collection. Most recently, Dior had a holographic show in Paris. This trend shows that the future may be digital, but many predict that people will miss being able to feel the clothing they are buying, so digital will not be all-consuming in the industry. Still, it is a smart business move for showrooms and other types of fashion companies to invest in developing virtual ways to sell clothing. The key will be to adapt to the circumstances and use all the tools at a company’s disposal. 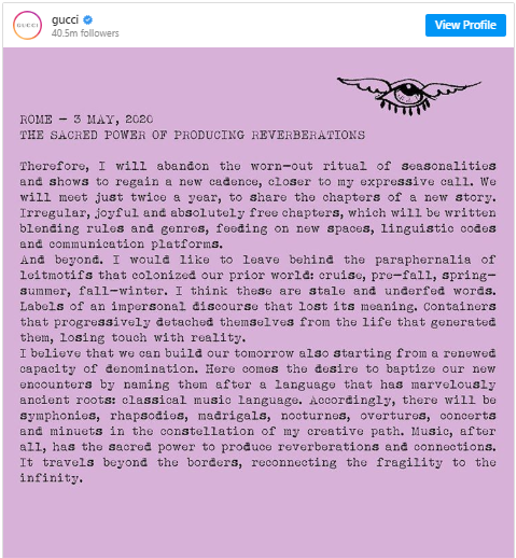 There has been a large debate about the current way we sell fashion. Many believe that selling based on seasons is an outdated strategy. Recently, a group of influential fashion designers, retail executives, and others—including Nordstrom, Bergdorf Goodman, Holt Renfrew, Mytheresa, Harvey Nichols, Tory Burch, and Pierre-Yves Roussel, Marine Serre, Craig Green, Gabriela Hearst and Mary Katrantzou—signed a petition to change the way clothing is sold so companies can sell their extra stock from before quarantine. This would allow clothing to be sold when they can be worn, discounting the clothes at the end of the season rather than the middle.

While it is uncertain whether or not creating a new fashion calendar will work, two brands have already made the leap. Saint Laurent announced its intention to skip Paris Fashion Week this September and reshape its schedule for showing collections for the rest of the year, in a break with the conventional fashion calendar. The second brand to change its fashion schedule was Gucci. The brand has decided to only have two shows per year.