Before our LIM College class walked into M&S Schmalberg, we envisioned a huge factory with several workers, all doing the same task, in a huge warehouse-looking room. M&S Schmalberg is anything but that.

In their quaint West 36th St. factory, about ten workers, mostly women and a few men, carefully hand make, stretch, press, cut, and assemble flowers. Adam Schmalberg, representing the fourth generation of his family’s business, gave us a wonderful tour of the entire factory. Although only one floor, the factory has thousands of flowers stacked floor-to-ceiling in the welcoming area, where we gathered first. 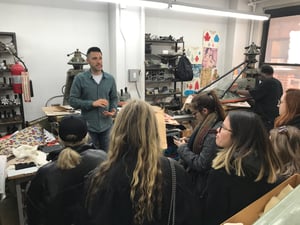 Adam started the tour by giving a brief history of his family’s 103-year-old business. M&S Schmalberg was founded in 1916 by Adam’s great-grandfather and great-uncle, Morris and Sam (hence M&S). Their nephew, a survivor of the Holocaust, inherited the business and then passed it onto his son and daughter, Adam’s father and aunt. Today, the Garment District of NYC, where the factory is located, is much different than when the company started. There used to be several fabric flower makers in NYC, but only a handful left are left now.

After Adam’s explanation of the history of the company, we toured the rest of the factory. We stepped into a room with color-coded fabric flowers. There were flowers of all hues of the rainbow, different shapes and sizes, and different fabrics. Adam explained that these flowers were there for reference for a customer or the workers when producing large quantities. 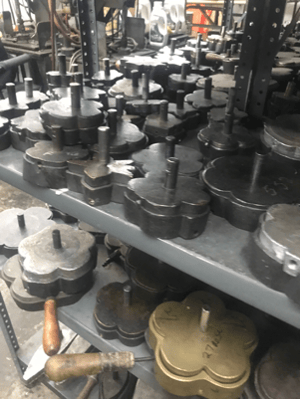 Next, we moved onto the cutting machines. These were huge cutters that used weight and pressure to easily cut out several layers of fabric to create the petals for the flowers. All around us on shelves were different flower-cutter shapes that could be attached to the machines.

Then came pressing and stretching. Across from the cutting machines were hot-pressing machines that pressed on certain details like veins and lines on leaves and flowers. Then, directly across from that were the stretching boards that stretched the fabric to make it ready to be cut.

Last but definitely not least, Adam took us to the main area of the factory where about five women were delicately hand-assembling petals onto wire stems with glue. Their meticulous work put the finishing touches on beautiful flowers for brands like Ralph Lauren, Vera Wang, Marchesa, and Oscar de la Renta. Adam told us they were creating flowers for Vera Wang at that very moment, and a woman named Miriam showed us the huge 32-inch flowers that were about to be sent out for Vera.

M&S Schmalberg was such a pleasant surprise, considering how it differed from what we imagined it. We were amazed at how many high-end brands order from M&S and were happy that this small but productive, fourth-generation, American fabric flower factory is still thriving over 100 years after its founding.