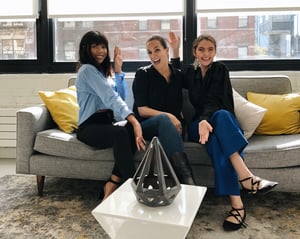 This article is part of a series of interviews conducted by LIM students with winners of the Accessories Council's 2019 Design Excellence Awards (DEA). The students are enrolled in Professor Andrea Kennedy's Introduction to the Fashion Business class.

We had the pleasure of interviewing Doryn Wallach on October 24 at her office in New York, NY. We conducted this interview to discuss Doryn’s win in the Accessories Council Design Excellence Awards. Wallach won for her Sapphire & Diamond ring in the Fine Jewelry category. We went to talk about her winning design, but to our pleasant surprise it was so much more.

Doryn is a very down-to-earth woman who was very easy to speak to. This being our first interview, you’d think we’d be nervous, but there was a sort of familiarity that made the interaction effortless. We were inspired by how passionate she was about her designs and it was interesting to see where others pull their inspiration for new pieces.

Doryn was an interior design major who graduated from the Fashion Institute of Technology (FIT). Following graduation, she went on to pursue a career in residential interior design and also worked as an assistant design producer for the show Extreme Makeover: Home Edition.

Wallach later realized her true passion was in jewelry, after thinking back to the times when as a young girl she would sit on the floor of the boutique where her mother worked and sketch the jewelry in the cases. After getting married, she even redesigned her own wedding ring, which is something we’ve never seen done before. Most women want a traditional wedding ring, but she made it something unique to her style.

Doryn’s interior design background did not go unnoticed in her jewelry career. She drew inspiration from architectural design, like Rockefeller Center, and the designs of the Art Deco period. Art Deco is a popular motif of the 1920’s - 30’s characterized by sleek and geometrical design. The shapes have clean lines and symmetry. 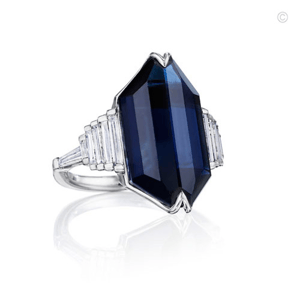 What we found most interesting is how Doryn was inspired by furniture. She created an earring in the style of a chair back and the chains of a necklace were shaped like the ball chain of a lamp, but were still delicate and beautiful.

The design that earned Doryn the award was her beautiful Sapphire & Diamond ring. The sapphire was originally a piece from a man’s ring previously owned by a woman whose father passed it down to her.

The woman sold the ring to Doryn, who loved this vintage piece. She kept the sapphire in its original shape and the only thing she changed was the mounting—made from .88 carats of reclaimed diamond baguettes with a contemporary platinum setting. This ring was perfect for Doryn, who had a well-known respect for vintage pieces. She took an older product and made it into a new and beautiful design. Talk about timeless.

After speaking to Doryn, it is obvious that she is a woman who values her work and pursues her career because it is her passion. 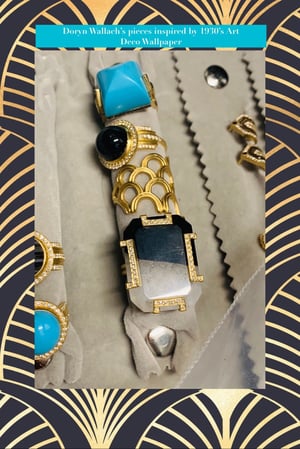 When making any product to sell it’s important that it be something you’re proud of, yet still suitable for another’s taste. We asked Doryn how she wants women to feel when wearing her jewelry, to which she responded, “The best compliment that I get is that it’s modern, but also classic. It’s not overly trendy...I want women to wear it and feel like they’re wearing something that’s fresh and different, but also something that they’re going to keep for a long time and pass on to their children.”

We finished the interview by asking Doryn what advice she had for us as freshmen at LIM College, new to the city. Because she was in our exact same position at one point and turned herself into the successful woman she is today, we valued her opinion.

Doryn’s response was, “Don’t expect everything to be immediate.” This is important to remember, because in the fashion industry it is easy to compare your own success to others’, but it’s important to remember that everyone’s path is different. This is advice we will carry with us throughout our own career paths.