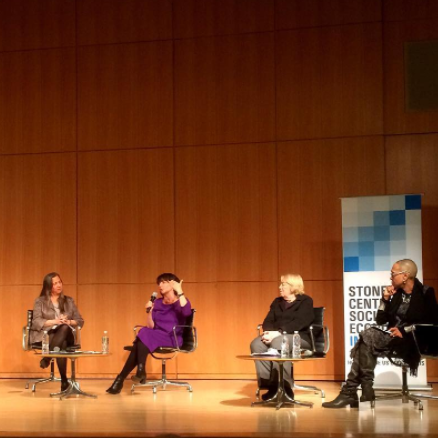 For American women, gender gaps in the workplace still exist. While the United States has made strides toward gender equality, equal pay, maternity leave, lack of public policy, and diversity in the private sector are issues that continue to plague working women in the US.  Democratic presidential candidate and former Secretary of State Hillary Clinton was a source and symbol of hope for gender equality in the workplace. However, on November 9,  2016, America woke up to the news that Donald J. Trump was the elected 45th president of the U.S.

Upon Trump’s election, women were confronted with the fact that sexist attitudes – which feminists argue are partially responsible for his win – are still alive and well in 2016.  Did Hillary’s gender influence Trump’s election? Is America still not ready for a female president? These are the considerations of those who question how a businessman-turned-reality star stole the presidential election the career politician. Although many are fearful and uncertain how the Donald Trump presidency will play out, one thing is for certain: women want equal rights more than ever.

On Monday, November 15, 2016 New York Times columnist Gail Collins appeared before an enthusiastic audience at the CUNY Graduate Center, where she hosted a panel of leaders from industries such as public policy, journalism, entertainment, business, and research to explore ways women in the U.S can achieve gender equality in the workplace. The panel included Heidi Hartmann, founder and president of the Institute for Women’s Policy Research; Michele Coleman Mayes, author of Courageous Counsel: Conservations with Women General Counsel in the Fortune 500, and general counsel and vice president of the New York Public Library; Michele Ganeless, media consultant and former president of American television network, Comedy Central; and Janet Gornick, professor of political science and sociology at The Graduate Center of The City University of New York and director of the Stone Center on Socio-Economic Inequality.

“Those who get paid maternity leave are in the private sector who are highly educated women, not those who clean toilets at hotels.”

One of the biggest issues faced by women in America is paid maternity leave. The United Sates is one of the few countries that doesn’t have federal policy ensuring that new mothers receive paid time off to care for their children. Gornick said she believes European policies for maternity leave are far more equal and fair for both men and women. In Europe, men and women are both eligible for paid parental leave, whether the woman or man chooses to be the caretaker. In the U.S, however, paid maternity leave is not a required policy for all companies. Companies have a right to either grant paid maternity leave to their employees or deny it.

Gornick pointed out that “those who get paid maternity leave are in the private sector who are highly educated women, not those who clean toilets at hotels.” President-elect Donald Trump has advanced some proposals regarding maternity leave that he and his daughter, Ivanka Trump, have devised for working women in America. Trump’s policy includes a provision that would allow  six weeks of paid leave for new mothers, but not new fathers. On Trump's campaign site, a marriage requirement is cited which could possibly mean his policy would exclude one of America’s most economically vulnerable groups: single mothers. While Gornick appreciates the sentiment behind Trump’s proposal, she questioned his exclusion of single mothers and unmarried gay couples.

“In the private sector, there is a lot of talk about diversity, and instead of constantly talking about what seminars to host, they should take the initiative to start hiring more women.”

When discussing the private sector, Ganeless stated she believes that all policies affect women.

“In the private sector, there is a lot of talk about diversity, and instead of constantly talking about what seminars to host, companies should take the initiative to start hiring more women,” she said. Ganeless recalls a time when the industry was powered by women, but noted that it quickly changed as men took an interest in the world of media. Men rose to senior positions, and women were pushed out, fostering a male-dominated media culture. But Ganeless had some optimism about this. "Destruction is actually a blessing, because women are stronger and more motivated to reach gender equality than ever before,” she said, extending this idea all industries and corners of society.

"We need allies, specifically men, because support from men is crucial to achieving gender equality.”

Gornick said, “Institutions are different then in the U.S, which is why we don’t have the outcome other countries have,” and Hartmann interjected that “there is a lack of public policy addressing this issue.” For Hartmann, Clinton was the person who would change that, as she “would have helped women advance economically.” Hartmann explained that if women are afforded equal pay, "we could eliminate poverty involving women.” If women are paid what they deserve for the same work men do, they would be able to support themselves and their families financially.

This is not, however, an issue that women alone can fix, according to Mayes, who stated that in order to solve the corporate culture or equal pay, “we need allies, specifically men, because support from men is crucial to achieving gender equality."

Because there are still many industries that are male-dominated, all five panelists agreed that there needs to be a gender balance in the workplace. They stated that workplace diversity not only leads to a more tolerant and equal society, but also a thriving company culture and financial success.

The panelists received a standing ovation from the enthusiastic audience. Leading by example, these women in their own line of work have excelled in their careers, serving as inspirations to all women who hope to be successful in their industry.