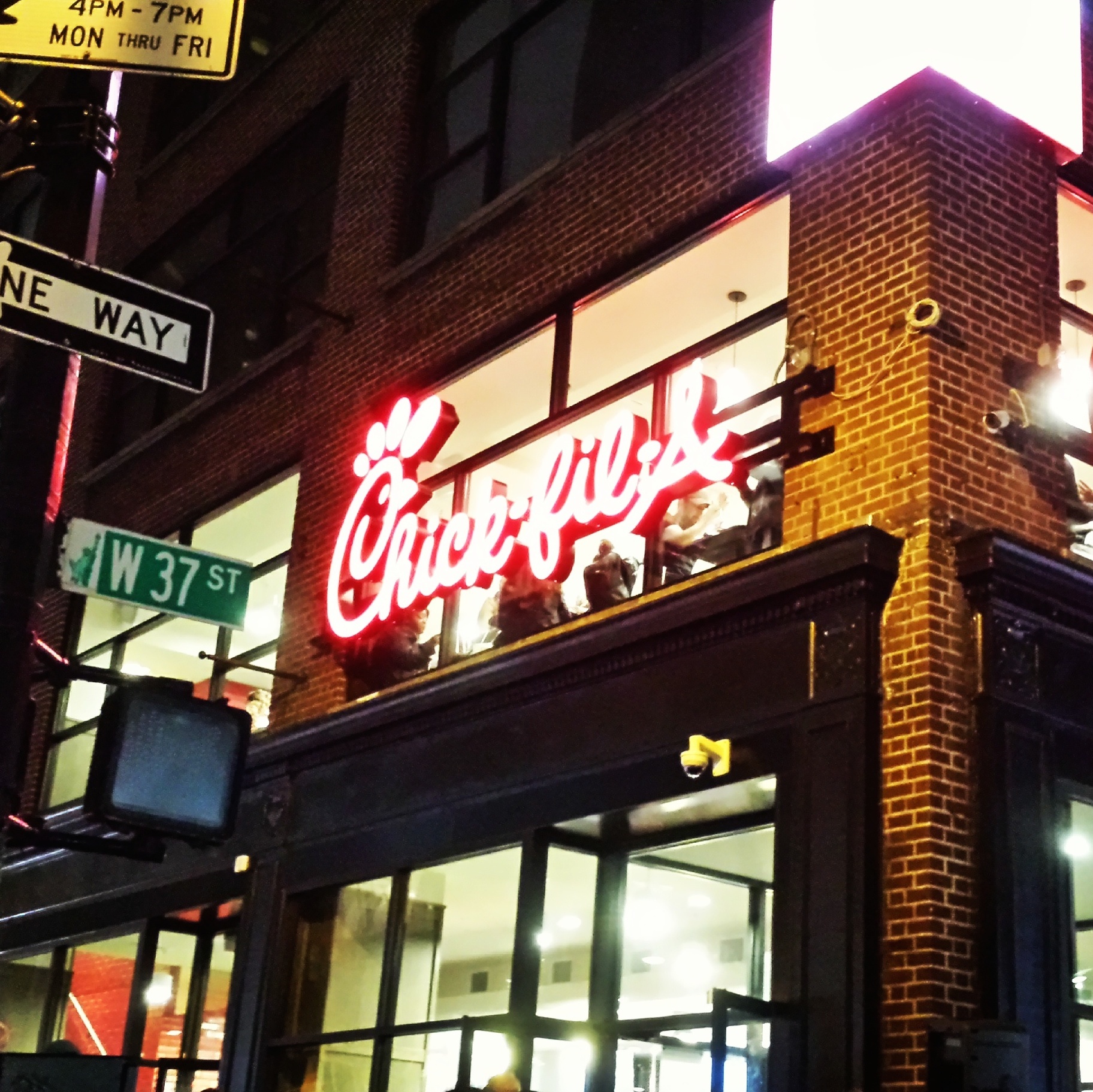 In a sea of fast-food beef, Chick-Fil-A has finally given us New-Yorkers a chicken oasis.Atlanta-based company Chick-Fil-A opened its largest location in New York City’s Herald Square on Saturday, October 3rd. This isn’t the first Chick-Fil-A in the city, but it is the biggest, the baddest, and apparently, the most controversial.

The restaurant has three levels and accounts 5,000 total square feet. To prepare for the grand opening, Chick-Fil-A recruited its best employees from all over Georgia and hooked them up with a three-week stay in New York City. For some, it was their first time in the big apple, but they had no time to explore. The Georgia-based all-star employees spent the majority of their trip training the new staff on everything from special sauces to ice cream shakes. Plus, some had to work all through the night (October 2nd to October 3rd) to prepare for the many customers camped outside the location eagerly waiting for the chance to win free Chick-Fil-A sandwiches for a year. At 5 a.m., the restaurant opened for one and a half hours just to serve these lucky customers.

Excited customers weren’t the only New-Yorkers waiting by the door, however. Chick-Fil-A has long being criticized by LGBT supporters for its strong support of "traditional marriage," and it has a long history of donating large sums of money to anti-LGBT groups. Other activists were holding up signs citing scriptures, trying to support the franchise. But most in attendance seemed interested in separating food and social politics.

The restaurant reopened that Saturday afternoon, ready to serve once again. As a former Atlanta resident, I had to make a point to support them. As I turned the corner of 36th Street and 6th Avenue, I began to hear the sound of blasting pop-rock music. I turned my head to the left and there it was.

The line outside the restaurant was literally a party. Customers were singing, dancing, laughing, and being interviewed by over-zealous southern employees. I arrived around 8 p.m., and by that time, the store was averaging 500 customers per hour, according to the event's DJ. The line was still around the block, but it went really fast; I was extremely impressed. As I finally made my way in, I found not only a jolly southern security guard holding the door for me, but a handsome Georgia boy with an iPad ready to take my order while I walked. Ah, home sweet home! I ordered a Chick-Fil-A sandwich meal (comes with wonderful waffle fries) and a small cookies-and-cream shake (trust me, it’s not that small, that sucker is 520 calories). I also got BBQ sauce and ketchup to add. Trying to tweet and Instagram and order all at the same time wasn’t easy to do, but I was able to pull it off.

I didn't realize until I started eating my sandwich how much I had missed Chick-Fil-A. The moment I got home I ripped open that steaming bag, poured on my special sauce, and took a giant bite. Oh, don’t you worry, I savored that sandwich; however, I can’t say the same for the shake. I finished that shake before I even got back on the subway. The night was a success for both the restaurant and for me.

The new Chick-Fil-A has the aura of a monument standing tall on its corner in Herald Square. Once again in America, The South has met The North, serious political issues in tow. And (queue southern accent) boy, did this go down in chicken history.