Ryan Reiss is a New York comedian that can be seen working crowds at comedy clubs as well as opening for Late Night with Seth Meyers.I interviewed Reiss earlier last Fall to get an insight into how he has made his mark in a competitive industry.

Originally from New York City, he knew he always wanted to live in Manhattan because “it just seemed like where the action was.” He first went to school at Nassau Community College but at the time wasn’t sure what exactly he wanted to do.

“They had three film classes. I took all three and loved them. It was the only time I was inspired to do anything,” says Reiss.

He started looking to go to school for film and found a few options with good programs, but ultimately chose NYU due to being offered a scholarship.

His dream was to do comedy, but he kept it to himself because he didn’t want anyone to tell him that he couldn’t do it. He notes everyone he watched on Saturday Night Live as inspiration but didn’t know he would turn comedy into a career.

“I thought I would get a job near it,” says Reiss.

He started out working at MTV as an assistant with long hours and no pay, then went on to do freelance writing for them. Around this time he started doing standup comedy at night.

“I didn’t really think anything would happen, it just felt better to have a chance. One week I was in Cancun writing for MTV Spring Break, the next week I was a PA on a Disney show. Standup jobs became easier to get so I started focusing on that.” 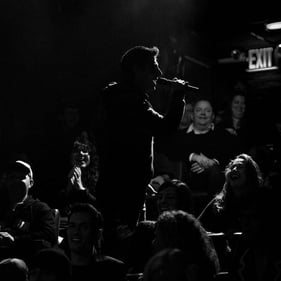 Late Night with Seth Meyers began in 2014 and Reiss knew he was right for the audience warm-up gig.

“I asked every person I knew for a referral. I knew I was right for the gig, so I had to get an audition,” says Reiss.

He was one of three people considered for the job and ultimately he was chosen. He has expanded his work at Late Night by also writing monologue jokes for the show. His explanation of the differences between television and standup is that “with stand up, it's my show. Whatever I think is funny, whatever I want to do. When you work in television you are part of a team. You are working together to produce a product for a larger audience."

An integral part of marketing oneself today is social media. Reiss has an interesting take on how social media platforms influence the field he is in.

“Social media is making it hard to separate talented comedians from beginners. People are more interested in looking like a great comedian than taking the time to become one. Somehow the Facebook photo of the show has become more important than actually putting on a good show.”

For this reason, Reiss ensures that he always does his best and seeks new opportunities.

“Always try. I love the word ‘no’. It means I am putting myself out there. I am taking a chance. If I haven't heard ‘no’ in a while, that means I am not doing anything.”