Behind The Scenes: Proenza Schouler

What started as collaboration between two fashion design students at Parsons for a senior thesis in 2002 has since transformed into a legendary and successful fashion label.

Jack McCollough and Lazaro Hernandez, the creators of Proenza Schouler, gave listeners insight on their journey through the fashion industry at Fashion at FIAF Talks on Wednesday, April 15. The French Institute Alliance Française hosts this festival which includes talks, films, and exhibitions that take an inside look at designing, wearing, and representing clothes.

The two visionary designers were welcomed on stage by the moderator Sally Singer, Creative Digital Director of Vogue. The conversation began with a brief introduction of the two extremely talented designers sitting beside her and then the questions began flowing. For those of us in the audience that were unsure where the term Proenza Schouler came from, it was answered right away: it is both of the designers' mothers' maiden names.

Sally chimed in, saying, “never use your name, because in the fashion industry you lose it.” Both designers nodded in agreement. 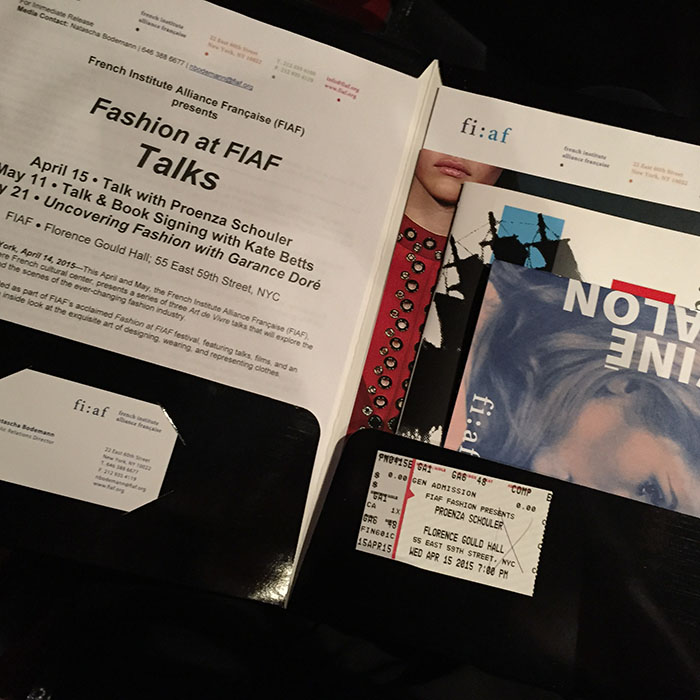 The next question paved the way for the conversation that everyone was there to hear: how and why did you get into the fashion industry? Both Jack and Lazaro came from different backgrounds, with one starting out as an artist and the other enrolled in pre-med. Things changed and they both took a turn to fashion. One found himself interning at Michael Kors, while the other was at Marc Jacobs. They were friends throughout their time at Parsons, and in their senior year, they decided to join forces.

Lazaro explained, “in a time where everyone was tearing up t-shirts and calling it fashion, we felt let’s do the opposite and came up with punk couture.” Jack discussed how music and art were major components of their collection and mentioned artists such as Kurt Cobain, Pearl Jam, and Grateful Dead. In their presentation of their senior thesis, the two young and thriving designers were approached by the Vice President of Barney's, who told them the company wanted to buy their line to sell in stores.

Today the company has turned into a well-known womenswear clothing line, in part because of their deep connection to art and craftsmanship. Fashion, to them, is about craft mixed with contrast. They incorporate technology into their process by adding laser cutting into their designs. The duo works with three to four different countries at a time on their looks. The concept of the Proenza Schouler brand revolves around “the spirit of the girl.” The two focus on abstracts, moods, and movement and incorporating them into fashion.

“The girl is constant. She is a contemporary woman interested in today, culture, and art," Lazaro explained. The designs are what feel is right for today; an expression of experiences.”

Jack stated, “We want to experience the world, and it is important to get your hands dirty. We apply this to our collections.” 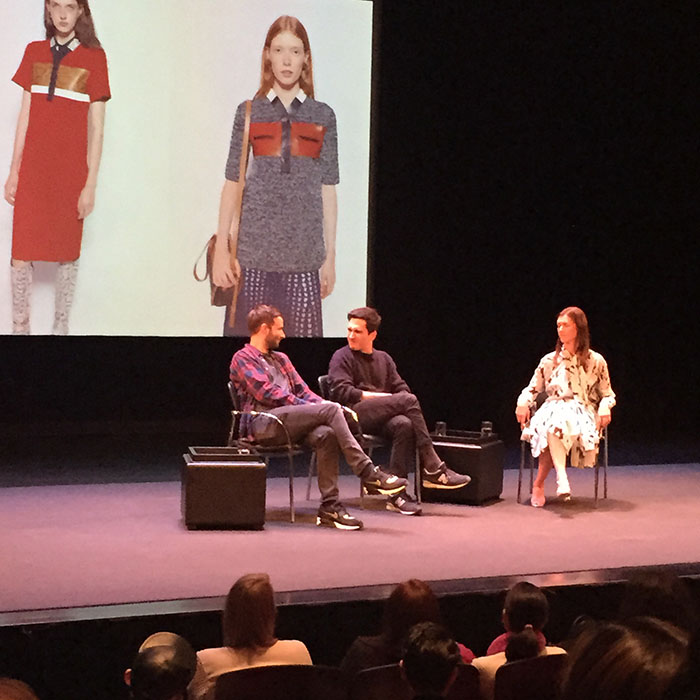 He further explained that part of the process is the people and the spirit. In their spare time, Jack and Lazaro travel to their farm studio and escape the hustle and bustle of the New York Fashion Industry. It is a place for them to let go and disconnect.

Sally asked if fights arise between the artists, and they said yes. Both designers see colors differently and have different visions sometimes, but they come together somewhere in the middle every time. Singer then questioned them, wondering what the next five years would hold.

“We don’t like to plan things," Lorenzo said. "We go for a more natural approach; however, we would love to see where we could go with a men’s line and open the door for fragrances. It is amazing to see how far we have come, and to see people such as Cate Blanchett, and Cindy Sherman, wearing our clothing.”

In closing, both Jack and Lazaro gave advice to the audience and those aspiring to make it in the fashion industry.

“Know your audience and who you are and what your message is. You have to be extremely ambitious and fierce in today’s world,” Jack said. Lazaro went on to say, “fashion is a business where you can’t just survive on creativity. Piss some people off and do what makes you feel good. Freedom is a luxury.”