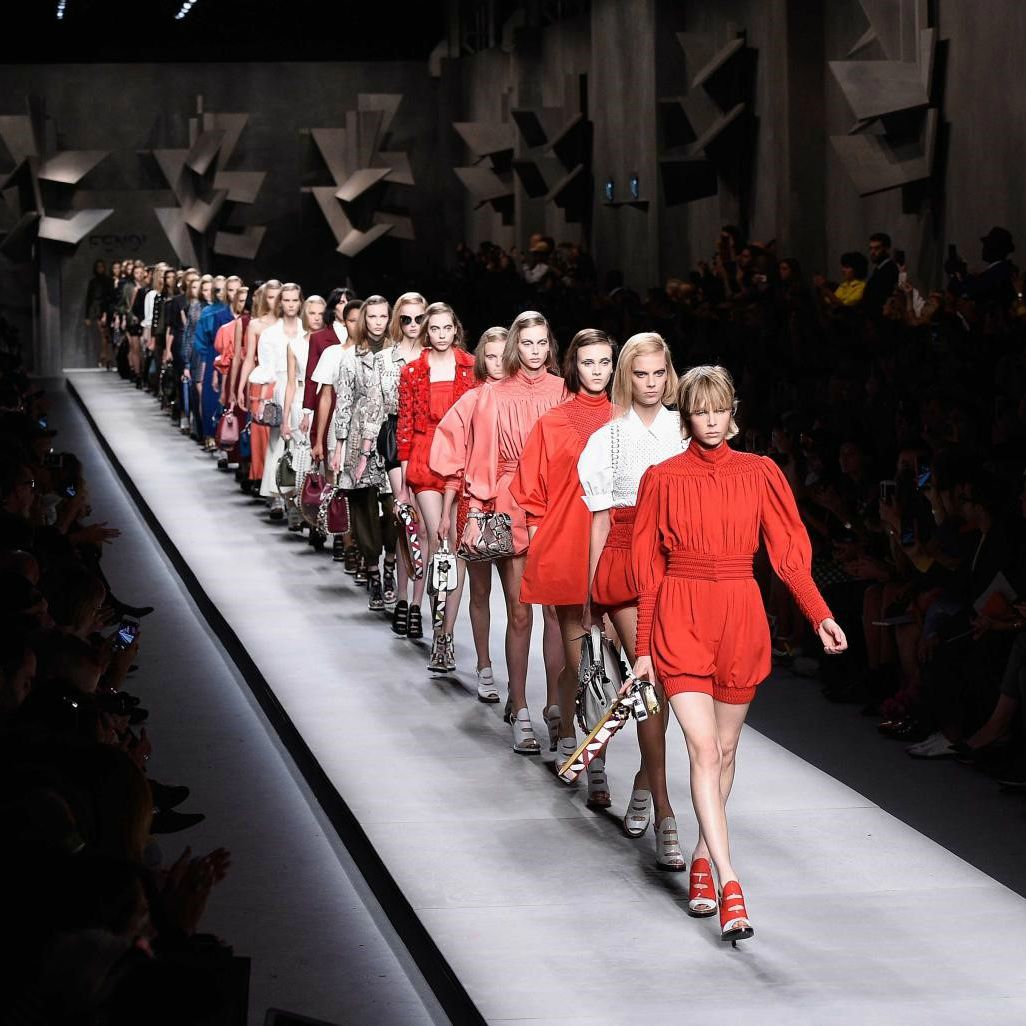 Out of all the designers who showed at the recent Milan Fashion Week, there were three who showed viewers how it’s really done.

FENDI: Karl Lagerfeld is known for his "agressive" runway sets, but twisted with a sense of nature and greenery. The recent Fendi show in Milan for MFW was surrounded by trees and concrete; "the aggressiveness of the environment is opposite to the softness of the clothes," Lagerfeld shared with his latest Fendi show. The signature look of Fendi popped with the bubble skirts and puffy sleeves, but the grey tones and linear lines gave the brand a fresh look.

Lagerfeld spoke of the theory, calling it “Toughness vs. Feminism,” and how it plays such a big role with his models, and his clothes, during his shows. The idea of "protection" shows through the collection, with army green colors and breastplates as accessories. This year for spring/summer in Milan we saw reds and puffy sleeves almost everywhere. In seasons past, we wouldn't have seen this from Karl, since before he showed "girlish" looks with lighter colors and bobby pins in the hair that were put together lightly. 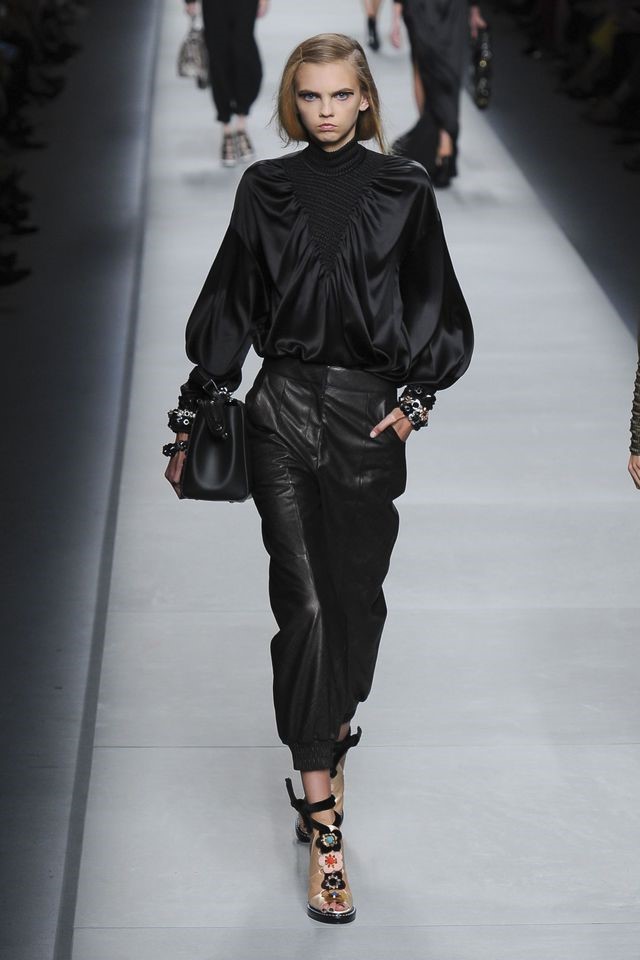 Lagerfeld claims he loves change in his work, but he won’t ever change. His signature look and specialty is the high-neck, and he claims he always incorporates that look in each of his shows. As he says, "When tradition meets future, you don’t know what period anything is from."

Miuccia Prada: After re-launching the suit as the new face of the label, Miuccia Prada became obsessed with the look. The not-so-feminine constructed soldiers and plaid become a staple for the brand. But traditional looks like loose structured jackets and the pin skirt of course remained. Prada wanted to make the suit less traditional as well by playing with hemlines and fabrics. 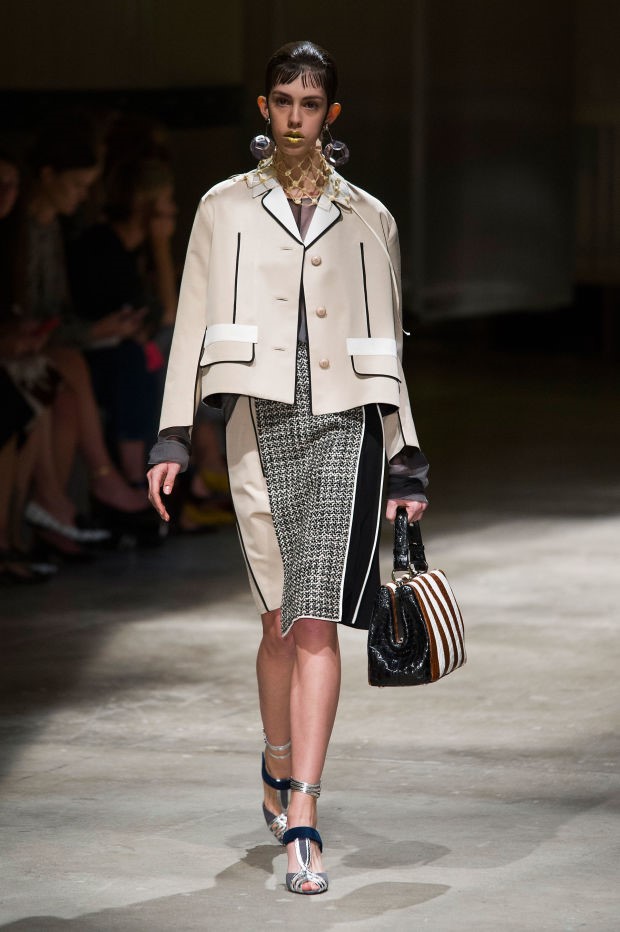 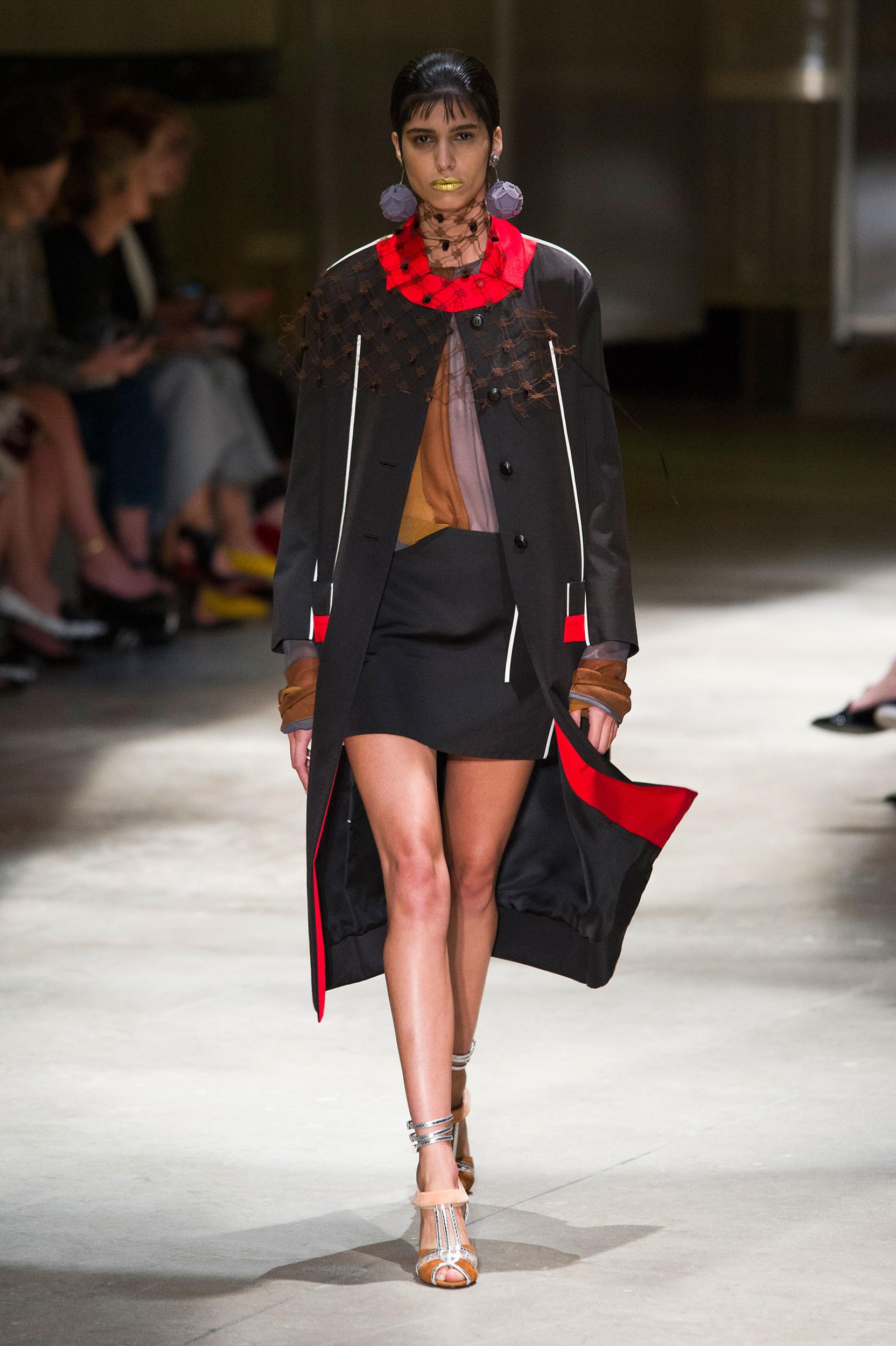 The suit was soon enough constructed from a sheer organza with a “no-clothes” look. Finishing the suit and looks backstage were a tweed skirt with a sheer beneath including leather stripes and bejeweled flower embellishments for the season. Taking away from the seriousness of the suit look, Prada used signature playful accessories. From mini disco ball earrings and orb earrings to the high-neck lace prints, there was an air of sophisticated nonchalance. Prada ended the chic runway collection with a touch of golden lipstick (a kiss for Italy).

Pucci: Massimo Giorgetti takes Milan by storm with his first collection for Pucci as Creative Director. His show for Spring/Summer 2016 brought nature looks that incorporated both fur and feathers. Tropical prints and sea tones mixed with colorful fish and nets were seen throughout. Mixing materials is becoming Giorgetti’s signature touch. The designer continually embellishes his creative side by using a vast amount of imagination, as evidenced in one of the looks with a leather bodice worn over a peach pleated sheath. 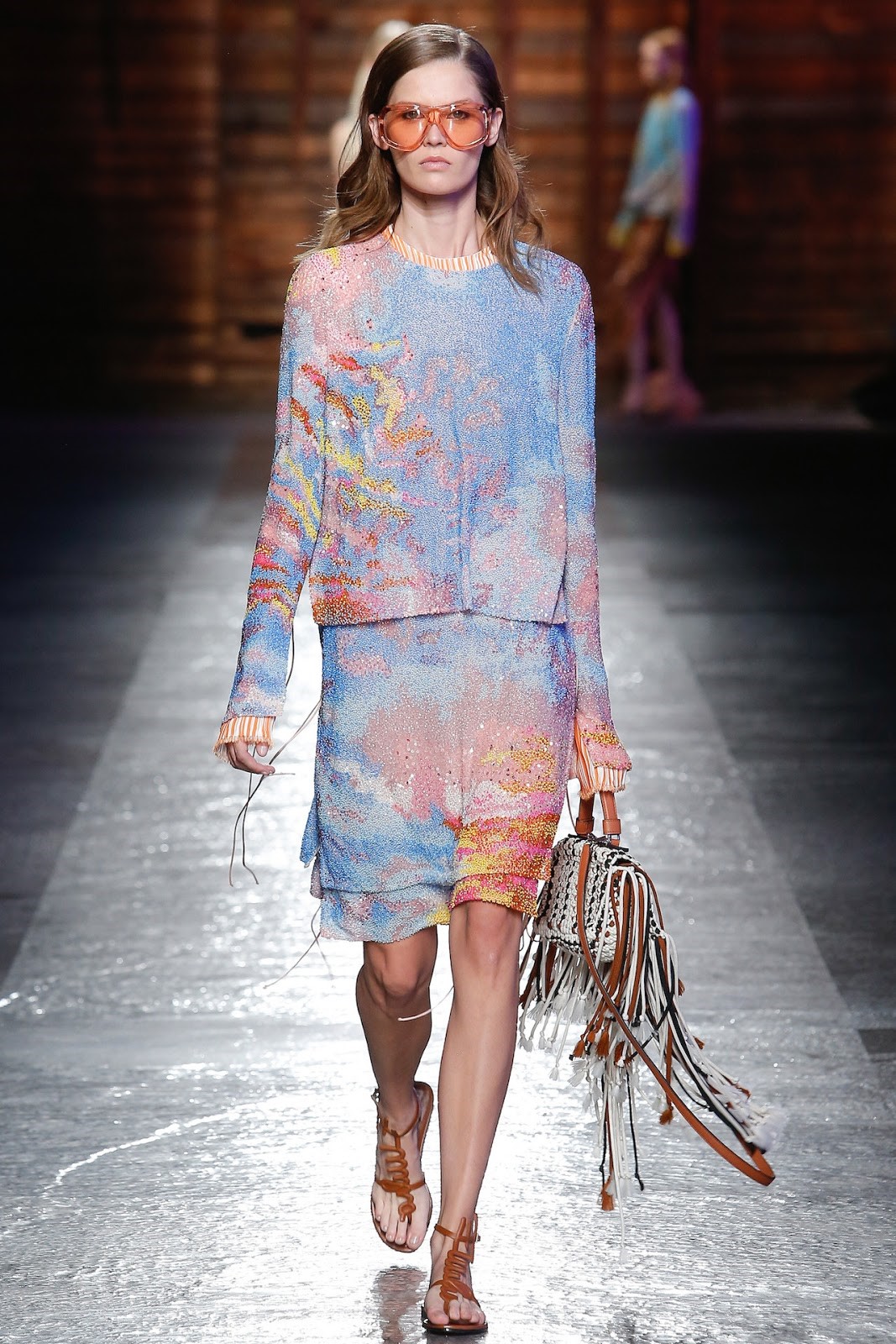 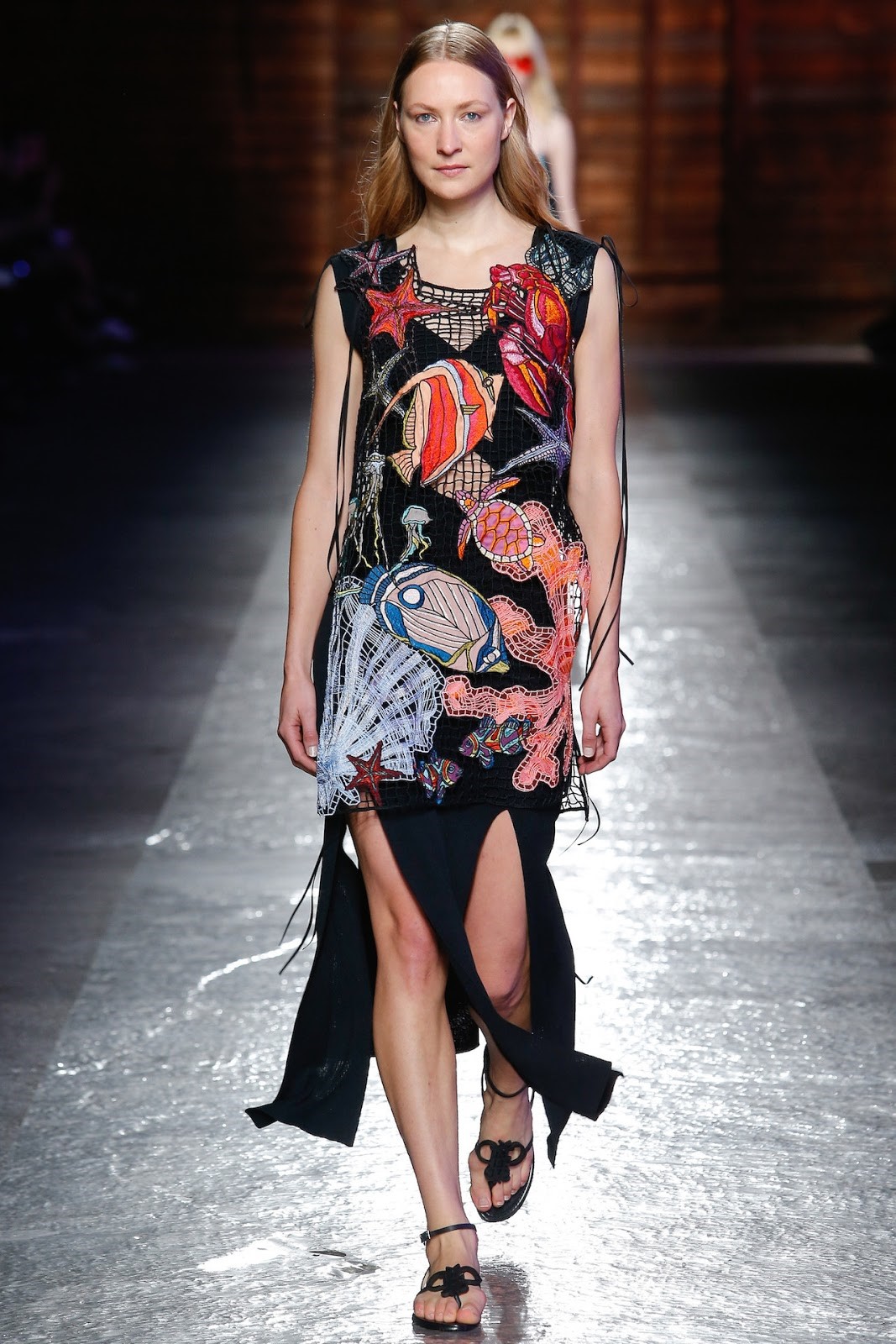 The looks were inspired by the sea kingdom and included earrings that resembled fish bones. Giorgetti also used the current trend in Milan: fuzzy slippers that appear as accents of the outfits and collection itself.  He had matching sets of sheer black and white tops and pants that created a modest look to the Amazonian collection.