After traveling from JFK Airport to Berlin, with a transfer flight to Milan, I took the train from Milan to Ancona. When I arrived at the train station I was picked up by Stephano, a Grottini employee.

From there he took me to a bike store to pick up a bicycle that I would use to ride to the beach and the town of Porto Recanati. After we picked up a bike, we went to the grocery store so I could stock up on groceries for the week and have food to cook in the kitchen at the apartment.

Stephano then showed me around the apartment for the first time, which was very large with four bedrooms, two bathrooms, a living room area, and a kitchen. Stephano then introduced me to another Grottini employee, Massimo, who gave me my set of keys for the apartment and invited me to dinner that night.

My first night in Italy was one I will never forget. After unpacking my very heavy suitcase I was picked up by Massimo around 8:30 for a night on the town. We drove to the heart of Porto Recanati and had dinner on the beach at a delicious Italian restaurant. 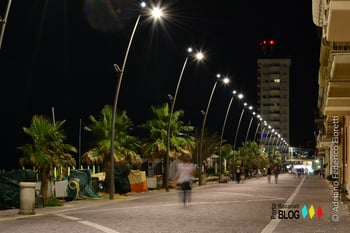 s a vegetarian in a town that is very big on seafood, I was a little worried about the menu written in Italian but it turned out they had a page included for vegans, which was perfect. The first meal I had was off menu and made special by the chef, a vegetable spaghetti dish that was one of my favorite meals of the whole trip.

After the amazing dinner we walked around so I could get a feel for what Porto Recanati was like, which was absolutely beautiful. The sun was setting over the ocean making the night breathtaking.

The first weekend I spent in Porto Recanati happened to be when the town festival celebration of summer was taking place. Just about everyone from Porto Recanati gathered to celebrate with food, music, dancing, art, drinks, and games.

I rode my bike there with Massimo and we met some of the other Grottini employees there and some of their friends for dinner on the beach. Afterwards we walked around, listened to different live bands, checked out the street vendors, and had a great time. 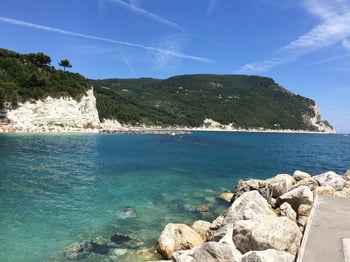 The next day I went to Numana, which has a crystal clear beach about a half hour drive from Porto Recanati with some fellow employees and friends. It was one of the most beautiful beaches I have ever been too and probably my favorite place I visited while in Italy.

Sunday came around and I was so exhausted from jetlag and all the activities that I slept until 3 pm! Sunday was a day for relaxation and homework as well as thinking about new Butterfly Twists ideas.