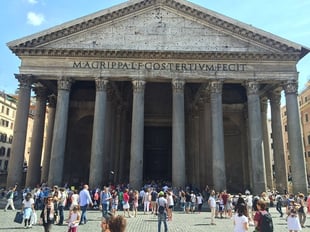 Studying abroad at the American University of Rome, I am really excited to be here. This weekend was eventful and busy for my roommates and I! On Saturday we spent the day walking around Rome. We had no plan of where to go and just decided to explore and see the city.

We walked from our apartment to the center of town since we felt the best way to see everything was on foot instead of taking the bus or the tram. Seeing the rich culture of Rome was fantastic, and we tasted more gelato, (which is very addicting!). This time I got the tiramisu gelato. (Tiramisu is a popular coffee-flavored dessert here in Italy.) 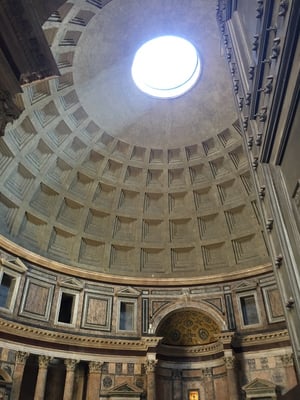 We ended up making our way to the Pantheon, which originally was a Roman temple dedicated to all the gods of pagan Rome. This place was really interesting because of the architecture. When you walk inside the building and look up, there is a large dome with a circular open hole. This allows light to shine through. It was pretty unusual to see a building built like that, especially since it is so old. The current building was built in 118-128 AD, but the original was from the reign of Augustus (27 BC - 14 AD). Since the 7th century though, the Pantheon has been used as a church dedicated to "St. Mary and the Martyrs."

Of course, we also made it to the Colosseum. Unfortunately, though, there wasn’t enough time to go in, but we'lll save that for a day when there is more than a moment or two. In any case, it was really exciting to see the Colosseum in person, because the only time that I had ever seen it in before this was in photos or movies. It turned out to be a lot larger than I thought it would be.