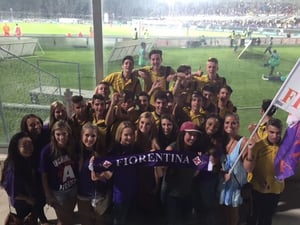 I attended my first professional football (aka: soccer) match in Firenze and it was an exhilarating experience to say the least. I walked through the tunnels of the stadium and my eyes were immediately exposed to a sea of purple that filled the stands, along with a lot of smiling and eager faces that anticipated the last game of the season.

I believe that it was very clear that we were Americans by the sheer look of being overwhelmed that transcended into feeling like a fish out of water; I felt completely out of my element. I have been to a lot of sporting events, but nothing prepares you for your first football match in Italy.

My friends and I looked around for our seats, not quite sure where to go and it took us a while to realize that the seat on your ticket means absolutely nothing when you are in the Curva section, which is a seating area that is more general and less strict about who is seated where. 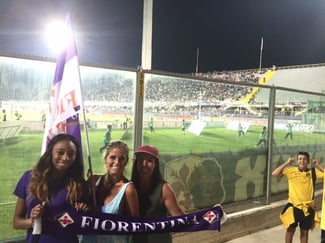 Initially we sat by ourselves with a lot of other Italians as a failed attempt to blend in, but I could feel a thousand eyes on me like my friends and I were the main attraction at a zoo. Something I have learned is that Italians don’t stare to be rude or because they think that you don’t belong there, they stare because they are genuinely just curious about you.

Shortly after the game started we gradually gravitated towards some other Americans and also to a local high school football team who you could tell idolized the Firenze football team and thought they were total rock stars. Deciding to go to this match was kind of a spur of the moment decision and my friends and I didn’t have time to buy anything purple which is the team’s color, but we still really wanted to get into the spirit so we asked the football team that was sitting next to us if we could take some pictures with them, their flag, and their scarves.

They seemed so excited and happily posed in the pictures with us. They were immensely proud and excited that we wanted to fully immerse ourselves in Firenze football. However, I am not completely ignorant to the fact that they are teenage boys and probably just wanted to take pictures with a bunch of girls. 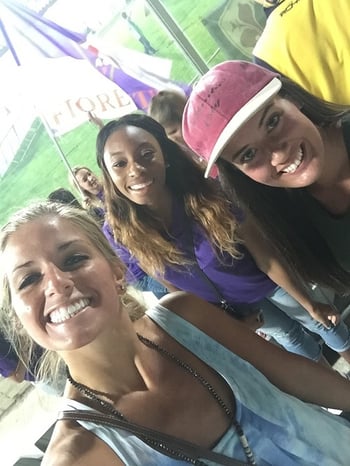 Before this match I knew that Italians were naturally loud people and living in my apartment in Firenze solidified that. There had been a few times when I was eating alone, but didn't feel like I was by myself because the walls are paper thin and everyone’s windows are always open so you're always a part of someone’s Italian dinner, regardless that you live across the street.

With that being said, the fans at this match made me feel like everyone in Firenze was having Sunday dinner in the same place and you want someone to pass the gravy from the other end of the table and of course in this scenario you are the American girlfriend/boyfriend that someone brought home so naturally it would appear as chaos, whereas Italians would argue that it’s just talking.

It is hard not to consume some of the passion that is radiated and projected from Firenze football fans. Something I love about Italians is that they never intentionally make you feel like you are an outsider and really appreciate it when you try to adapt to their atmosphere rather than expecting them to adapt to yours.

Everyone at that match had a common love for the team and at first I thought that the common love they shared was for the sport itself, but I quickly realized that is not completely true. The people of Firenze have a common love for the team and not the sport itself. The whole experience was about celebrating a team that everyone in that stadium felt a deep connection to. It was as if everyone had a son that was playing in the match. I never expected to be so concentrated and feel such a strong bond with complete strangers while watching a sport.

It was funny how in sync I became with them and when they chanted, I chanted. (Well, attempted to.) They jumped. I jumped, and when they screamed, I screamed.

Firenze ended up winning and it was an amazing victory to be in the midst of. I now believe that there are no fans more passionate than Italian football fans, and especially in Firenze because it is what they live for and it is an essential part of the Florentine culture.