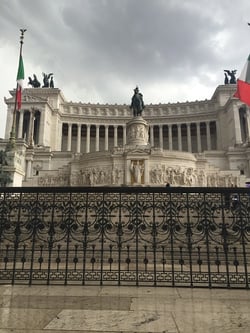 Ahh Roma! So starting off on my summer abroad trip to Rome was a little bit of a struggle. The plane was delayed for two hours due to a faulty air conditioner. This was pretty annoying because we were just sitting on the plane for those two hours.

Around 7 pm my flight finally took off! The plane ride was not too bad. I fell asleep for most of the flight. At one point I woke up and looked out the window and saw a beautiful view of what I believe to be the French Alps.

After I got off the plane, ventured through customs and grabbed my luggage, I met up with a representative from the American University of Rome. Then I met up with a few of my future roommates.

We went to our apartment which was a lot larger then I expected it to be. The stove is completely different from an American stove. You actually need to take a lighter or a match to light the stove. It took my roommates and I quite some time to figure out how to work a lot of the things around the place.

The appliances are not like the ones in America. You have to use everything in moderation because it is very easy to blow a fuse in the apartment, and that could leave you in the dark. We were told that we could not use the washing machine and the shower at the same time because this would also cause a fuse to blow. However, our apartment does have a microwave which I did not expect to see. 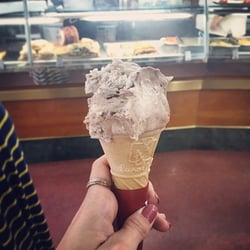 One of the first things my roommates and I did was go to the supermarket. The food was not expensive at all which shocked me. The fresh fruit was also amazing. It was so sweet and tasted so fresh! The fruit and vegetables tasted so much better than in the U.S.The Italians definitely have very defined tastes.

After our first class, we ate lunch and got some great iced cappuccino, which was probably the best coffee I have ever had! My roommates and I also went into the center of town, which is just a short bus ride away.

Here we walked around and saw the, “Altar of the Fatherland,” and got some really delicious gelato. The first gelato I tried was, Nutella flavored, and it was beyond amazing!