posted May 6, 2016 by Danielle Infantino 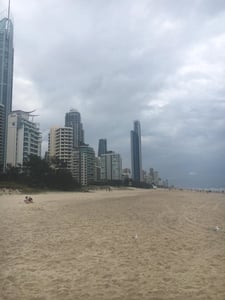 I knew that this trip was a quick one, so I wanted to do as much as possible in the limited amount of time I had.  To start off, my friends and I stayed at Surfers Paradise Beach where the sand and surf were conveniently down the block from the hostel we were staying at.

Another popular beach in the area was Byron Bay. Our trip there was an all day venture considering it was about an hour away by bus. When we got to Byron Bay we had a limited amount of time there because the bus was scheduled to pick us up at a designated hour later on in the day. Fortunately, we were able to quickly go through the shops and have enough time to sit by the water.

One of the most exciting things we decided to do on this trip was head to the National Trust Currumbin Wildlife Sanctuary. We took the bus down and went through different parts of the city that we handn't seen yet, which was more like a town and less like the beach. 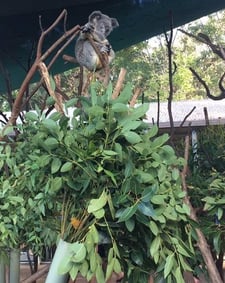 We heard that this is where you were able to hold a koala and snap a picture. Of course, that was first thing I wanted to do when we got there. I have been talking about doing this since the minute I found out I was going to Australia. Needless to say, I was not let down; it was one of the most surreal experiences in Australia yet.

After that exhibit we went to the Kangaroo Exhibit where they let us feed the kangaroos and basically set us loose with them. We were allowed to touch them and be up close with them, which was a really cool experience. Some of the workers who have been there for a long time were able to tell us about their different personalities and how there are always a few who try to escape every now and then. 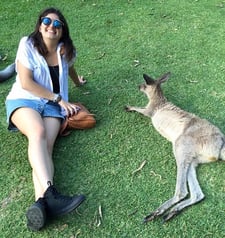 Being away from home can be hard, so we try and find things in each city that remind us of home. This time it was a restaurant called Brooklyn Depot. The waitress no doubt knew that we were from America (Maybe it was our accents or maybe it was just how excited we were about everything being “American Styled.”) Every bit of the restaurant had something to do with New York City. Even the signage around the place felt a bit like home.

Since the Gold Coast is primarily known for its beaches, that’s where I wanted the trip to end. My friends and I went down to the beach late at night, and we just bonded listening to music and talking about different experiences so far.

Until next time Gold Coast! xx