The Places I Visited While Studying in Paris 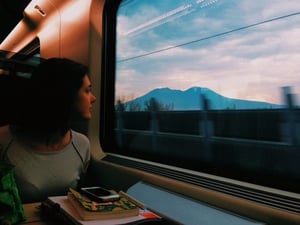 While I may have been an LIM exchange student studying in Paris, I did get to travel. Mais oui! One of my favorite things about Europe is being able to easily go to different countries at affordable prices.

When I visited Italy, I went to three cities, all of which were completely different from one another. My first stop was Venice and my least favorite among the three. While the city was beautiful, it was personally too much water for me. I admired the 80 euro gondola ride from afar and instead indulged in the leather goods, gelato, and pizza—a necessary to-do!

Anyway, spending three days in Naples resulted in two amazing day trips in beautiful 65 degree weather. One day consisted of climbing Mount Vesuvius and visiting the ruins of Pompeii and the other was dedicated to relaxing on the beautiful island of Capri.

These three days were a hike—literally. Huffing and puffing a good thirty minutes up Mount Vesuvius was definitely worth the view of the crater and the city below. Being the only active volcano in mainland Europe, you can still see smoke coming out from certain parts of the crater.

From there, my friends and I took the train to the ruins of Pompeii. In case you don't already know, Pompeii is an ancient city that was destroyed due to the eruption of Vesuvius. Today, the ruins hold artifacts, a theatre and a standing coliseum, as well as a few displays of people/animals that were covered by the ash. We were surprised not only at how much remained, but how massive the whole site was! Two of us actually ended up being lost within the ruins…when it was closing…during nightfall. Let’s just say my superstitious self didn’t react too well to that.

On our last day, we took a ferry to the island of Capri. Here we entered the Grotta Azzurra (Blue Grotto) and saw the Faraglioni rock formations. For an additional 13 euro, two-minute boat ride, we were able to enter the Grotta (basically a cave) and see the sunlight illuminate the beautiful blue water. The prices were a bit high for the attractions, but I always ask myself “When am I ever going to be here again?” and pay it anyway.

After this we walked, hiked, trooped, crawled (that was me!) across this uphill island to land in the Giardini (Gardens) Augusto. If you can’t tell by now, I don’t get much exercise and I’ve come to learn that my friends do. Here, we were able to view the famous Faraglioni which are three rock formations in the water, two of which create a small passage/arch. Sitting in the garden and taking in the view was a breath of fresh air from the hustle and bustle of Paris. It was also a plus that it felt like summer in the middle of what’s supposed to be my New York winter! 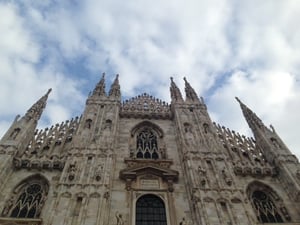 From Naples, my friend Haylee and I took the train to the beautiful city of Milan. Powered by its history and architecture, the trip was very humbling. What surprised me was not only the amount of churches, but just how grand each one of them was. We spent most of our time admiring about ten of them all over the city. The most famous church is the Duomo di Milano (Milan Cathedral) and compared to the Notre Dame in Paris, to me it was much more impressive.

Travelling has also led me to be able to listen to the different perceptions of “back home.” I laughed a bit hearing the negatives and the positives when the words “New York” come up. Even coming from a big city, I’m very humbled to be able to travel to other countries and cities, which are really incomparable. Each city is its own experience and being able to see it as an individual instead of a comparison only adds to that.