New York is such a small place that there's always a chance you will run into someone you know, or even celebrities. Don't get me wrong, I am not one of those crazy fans running around New York City to look for celebs, but I have met my fair share of them by coincidence. But bumping into this particular celebrity a couple of Saturdays ago has to be one of my coolest adventures so far.

It all started that sunny afternoon. I met up with my old friends who were visiting from Boston. We walked around the city to shop and eat and then we met up with some of their friends for karaoke in Chinatown. It was just past midnight and we were all standing at the corner of Bowery & Doyers, shivering in the freezing weather. It was then that I saw the legendary "Man Repeller," Leandra Medine, walking towards me.

I told myself, "Be calm Aaron, be calm." I was whispering to my friends and trying to explain to them who and how amazing she is. They thought I was joking, but for once I was being serious past midnight.

I understand that Leandra is not a movie star, but she is quite famous among certain groups, especially for fashion-obsessed people like me. Leandra was with her husband and they ended up waiting for a cab across the street. I thought for literally five minutes about whether I should go over to say hello and take a picture with her. I can't believe the socially awkward me waited that long to walk up to her. She smiled at me when I first made eye contact with her but I zoned out right away and then there was two seconds of awkward silence. Eventually I said, "You might think I am crazy but I think I know who you are." "Hi. I'm Leandra," she said while laughing. 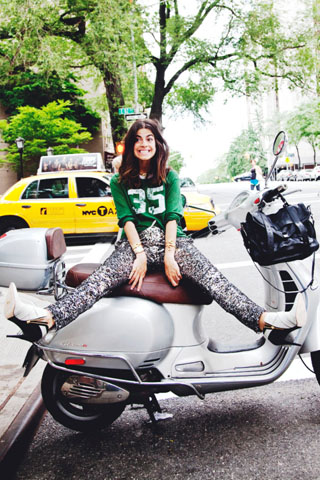 We chatted for a couple of minutes and just when I was about to ask Leandra for a picture, I realized that my phone was dead and I thought to myself of course my phone would run out of battery right when I needed it. She told me she liked my jacket and asked me to make her one, to which I casually replied before she hopped in a taxi that I would make her one in a few days. 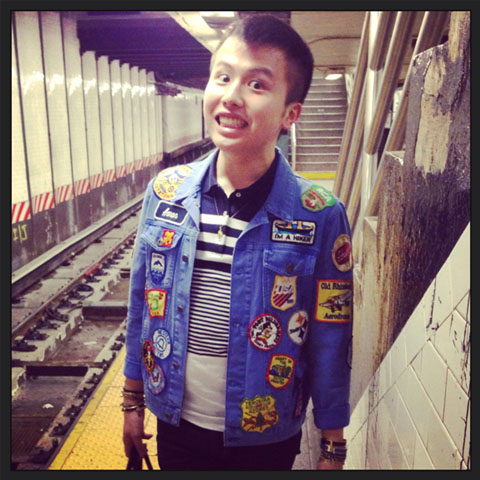 This was the jacket I was wearing the night I saw her, I got all those patches from eBay and it was just a little DIY project I had always wanted to do.

I was kind of sad that I couldn't get a picture with her, but then I told myself that New York is such a small city, and the chance that I will run into her again is very high. You never know.

In case you don't know who Leandra Medine aka the Man Repeller is, go check out her blog, you are going to love it!

Until next time… Xoxo Aaron