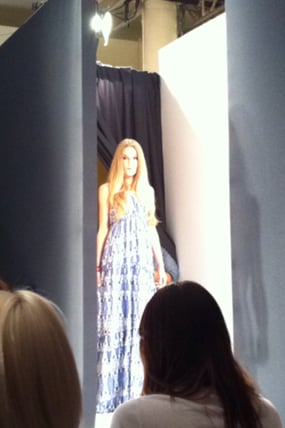 It was by chance that I got to see Daisy Fuentes’ show. I volunteered for a Style360 event, but I was an extra, so they told me to sit down and fill up the space. I sat in the third row and quietly watched the show.  Before it started, I read about her inspiration for the collection on a handout that had been placed on our chairs. Fuentes said she was inpsired by St. Tropez beach chic and the “energy of South of France.”

The mood of the show and the idea that Fuentes presented as “inspiration” did not mesh.  She wanted the “energy of South of France” to translate into both her show and her designs. It is true that the clothing is very much “South of France” chic, but the whole show as a package did not translate the “energy” she described. The models looked more miserable than usual, and one even tripped down the runway. The worst part of the show was the music. It did not inspire me to think of wonderful St. Tropez, nor the South of France. It would have been more  fitting for an African Safari or walking down the beach on the coast of Brazil.