Role Models Not Runway Models: My First Experience at NYFW 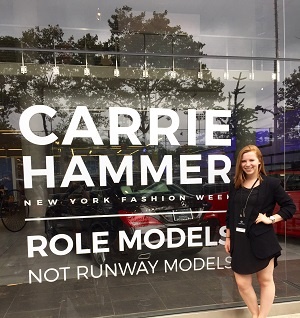 As Carrie Bradshaw once said, “Every year the women of New York leave the past behind and look forward to the future…this is known as fashion week.” Everyone’s favorite New Yorker could not have been more right.

Fashion Week is like Christmas for all of us at LIM, filled with more excitement, anticipation, and new styles than any other time of the year. I was fortunate enough to have my first New York Fashion Week backstage experience and it was incredible.

Last week, my professor, Terance Coffee, mentioned that he was producing Carrie Hammer’s 2016 Spring show at Mercedes-Benz Manhattan. He offered all of his students an opportunity to volunteer for the show to gain some experience in the industry. I emailed their Marketing Director right away and was offered a position on the social media team for the event. 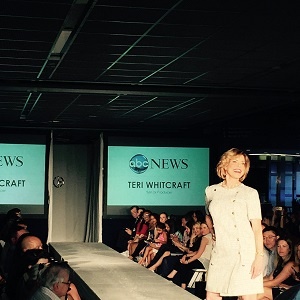 I did some research prior to NYFW and discovered that the designer, Carrie Hammer, is an entrepreneur who left her career in Marketing to create a line of affordable and fashionable business attire for women. The theme of the show was a continuation of her “Role Models Not Runway Models” concept, started in 2014, and featured businesswomen strutting down the runway rather than professional models.

My job for the day was to coordinate with two other volunteers on the designer’s social media accounts before and during the show. I was personally responsible for the company’s Snapchat account, which was pretty much the most exciting job that someone could have given a 19-year-old. I spent the day running around and snapping everything from the role models getting glammed up, to a funny step and repeat dance party with Carrie Hammer and her Marketing Director, who is an LIM alum. 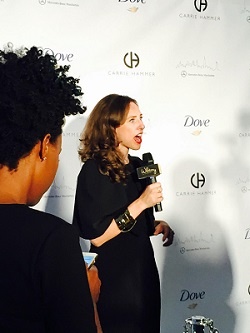 Judging from the crowd, the show was absolutely successful. The designs were flattering, professional pieces featuring blacks and whites with an occasional pink accent. Capes and overcoats, lace, double-breasted blazer dresses, and accented waistlines were mainly featured within the 27 looks. The Snapchat story that I posted was about 200 seconds long, which I know, is excessive for just about any other event, but Fashion Week is a special exception.

After the show, my supervisor emailed the volunteers and said how pleased she was with the social media team’s results. I was ecstatic. This was my first NYFW, I made new business connections, and I was able update my resume with this fun opportunity. In all, a very successful event and just another reason to get involved at LIM!